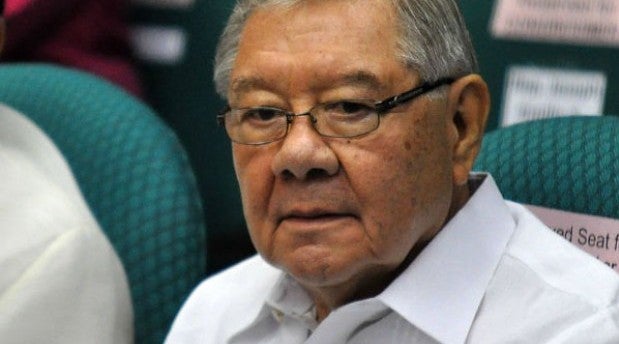 The Liberal Party (LP) is losing power swiftly and drastically as more than a dozen of its members from the Visayas have abandoned Speaker Feliciano Belmonte Jr. to join presumptive President-elect Rodrigo Duterte’s emerging coalition in the House of Representatives.

Negros Oriental Rep. Alfredo “Albee” Benitez, a former LP  member who ran for reelection as an independent in the May 9 elections, was the lead signatory among members of the Visayas bloc who signed a declaration of support for incoming Davao del Norte Rep. Pantaleon “Bebot” Alvarez in the race for the Speaker of the House in the 17th Congress.

Alvarez is a member of the ruling Partido Demokratiko Pilipino-Lakas ng Bayan (PDP-Laban) and Duterte’s personal choice for Speaker of the House in his administration.

Benitez arranged a meeting between Alvarez and Visayas bloc members on Wednesday to enable the comebacking representative (Alvarez served one term in the House together with Duterte, from 1998 to 2001). Benitez was aiming for at least 45 names on the declaration.

“We, the members of the Visayas bloc, extend our cooperation and support to the incoming Duterte administration in its pursuit [of] development and enactment of propeople and developmental policies and programs for our country,” said the declaration signed by 30 lawmakers from the Visayas region, a third of whom were from the LP.

Other representatives who signed the declaration were Lucille Nava of Guimaras; Henry Ong of Leyte; Raul Tupas of Iloilo; Melecio Yap and  Manuel Sagarbarris of Negros Occidental; Greg Gasataya of Bacolod City, and Arnie Teves of Negros Oriental.

Alvarez has already gained more than enough support to win the race for the speakership  even though the PDP-Laban has only three members in the House—Valenzuela Rep. Eric Martinez, Lanao del Sur Rep. Jun Papandayan, and Alvarez.

Just 12 days after the elections, Alvarez has obtained the support of the Nacionalista Party, Lakas-Christian Muslim Democrats, the 45-member party-list coalition, the Nationalist People’s Coalition and the National Unity Party.

Alvarez earlier said that he expected at least 50 members of the 114 LP members in the House to join the coalition.

Outgoing Budget Secretary Florencio “Butch” Abad, an LP stalwart, on Saturday said the future of the party in the House depended on whether Belmonte would challenge Alvarez for the speakership.

Abad said he expected some of the 114 Liberals in the House to fall out, and that President Aquino, the titular head of the party, would be “concerned” about that.

“There has to be a meeting first where the Speaker would have to tell us what his plans are, if the decision is to support the incoming administration and join the House majority in a coalition with PDP-Laban,” he said.

But with LP members defecting en masse to PDP-Laban in the mad scramble for juicy positions, Belmonte conceded defeat in the battle for the speakership a day after gathering close to 100 party members at the Edsa Shangri-La Hotel on Thursday.

Belmonte, however, has not yet made up his mind whether to be the minority leader or join other LP members in the majority coalition.

But a source told the Inquirer that Belmonte himself brokered the transfer of the bulk of LP members to the majority bloc when he met with Alvarez at his home a few days ago.

The source, an LP member who declined to be identified because he was not authorized to speak for the party, said Belmonte decided that it was better for the bulk of LP members to join the majority coalition but remain in the LP.

The source said Belmonte feared that if the LP took a hard line and force members to remain with the minority, many of them might choose to abandon ship and join the PDP-Laban or other parties.

Belmonte, the source said, agreed to the bulk of the members joining the majority to prevent the disintegration of the party.

Alvarez said there was no need for the Liberals to move to PDP-Laban if they wanted to join Duterte’s coalition for change.

But if Belmonte and the LP would choose to be the minority bloc, then the Liberals who wanted to join the majority would be required to pledge allegiance to PDP-Laban.

Alvarez said he expected to reduce the minority bloc in the 17th Congress to “bite size” or just 20 members at most. With a report from Nikko Dizon/TVJ

Salceda defects yet again, this time to Duterte