Belmonte: Alvarez is next Speaker 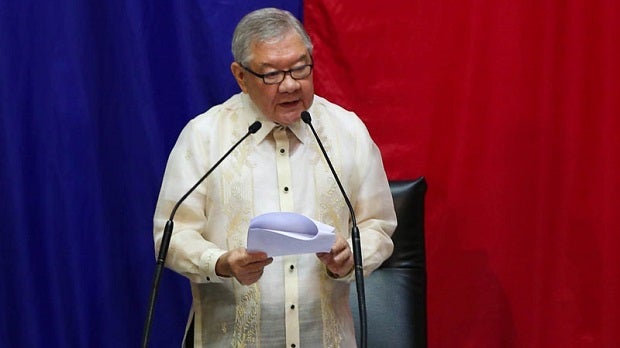 In a text message on Friday, Belmonte, who is also Liberal Party vice chair, said that with majority of the numbers favoring Alvarez, even he was sure the Mindanao congressman would be the next speaker.

Belmonte is seeking to reclaim his post counting on the numbers of around 100 Liberals, but it looks like he has conceded to the anointed speaker of presumptive President-elect Rodrigo Duterte.

Confirming that he met with the speaker aspirant in his house on Thursday, Belmonte said many Liberals were planning to shift to the majority to vote for Alvarez, one of three members of Partido Demokratiko Pilipino-Lakas ng Bayan (PDP-Laban) in the next 17th Congress.

“We talked at my house yesterday. I told him most of the Liberal Party bloc would like to join the majority and support the Duterte administration and him for speaker,” Belmonte said.

“I’m sure he will be the next speaker,” Belmonte added.

Asked about Alvarez’s claim that no less than 50 or half of the Liberals in the incoming 17th Congress had shifted their support to PDP-Laban, Belmonte said, “maybe more.”

If Belmonte loses to Alvarez, he will be the minority leader in Congress, according to the House rules.

Alvarez has said that with half of the Liberals joining the PDP-Laban, the ruling party will be reduced to the minority in Congress.

As of his latest count, Alvarez said he had 180 lawmakers across party lines to his side, more than the majority of the 290-member House.

But Belmonte clarified that he and the rest of the Liberals would rather be part of the majority, adding that he would not want to lead the minority because he did not know who its members would be.

The members of the majority in the House of Representatives are those who voted for the winning speaker, while the minority are those who did not, according to House rules.

Duterte is consolidating his forces in the lower House to push for his legislative agenda, which includes the reinstatement of the death penalty and the amendment of the Constitution by constitutional convention to convert the country’s system of government to federal.

Seen as big boost to Alvarez’s speaker bid are PDP-Laban’s coalition agreements with major political parties including the Nationalist People’s Coalition, the country’s second biggest political party next to the Liberal Party with 44 incoming representatives; the Nacionalista Party; the Lakas-Christian Muslim Democrats; and the party-list bloc.

Alvarez is also eyeing an alliance with the National Unity Party and the Makabayan bloc. RC/rga