Search for MH370 likely to end by August 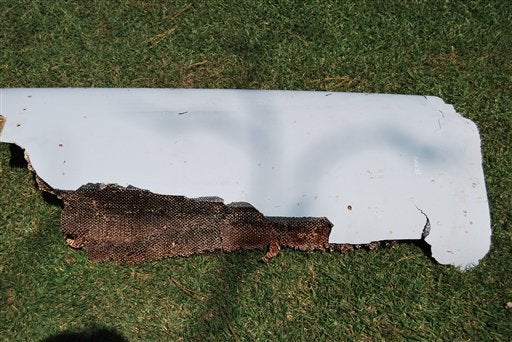 The curved piece of debris which may be part of the missing Malaysia Airlines Flight MH370, in Wartburg, 37km (22 miles) out of Pietermaritzburg, South Africa, Monday, March 7, 2016. South African teenager Liam Lotter vacationing with his family in Mozambique on Dec. 30, may have found part of a wing from the missing plane, while he was strolling on the beach. Liam struggled to lift the debris from the beach and carried it back home to South Africa before discovering it might be from the lost plane, but now aviation experts plan to examine the plane fragment. The Malaysia Airlines Boeing 777 jet vanished with 239 people on board while flying from Kuala Lumpur to Beijing on March 8, 2014. (Candace Lotter via AP)

SYDNEY—The massive search for Malaysia Airlines plane MH370 in the remote southern Indian Ocean is expected to be completed by early August, the man leading the hunt said Friday.

Less than 15,000 square kilometers remain to be scoured out of a 120,000 sq km target zone off western Australia where the passenger jet is presumed to have crashed.

Australian Transport Safety Bureau (ATSB) head Martin Dolan said there was no indication the zone would be extended.

“We have some way to go and our best bet is that we will complete that search late July, early August, depending on unforeseen circumstances,” Dolan told The Australian newspaper, referring to rough weather.

“The technical capability is there to continue the search but the resources to do it is a matter for government,” he said.

“At this point there is a diminishing level of confidence that we will find the aircraft,” Dolan admitted.

“There will be a lot of disappointment if we don’t find it.

“At worst we will know at the end of this process that the area we have searched does not contain the aircraft. At best we will find it.”

The search zone has so far yielded no clues as to what happened aboard MH370, a scheduled flight that disappeared en route from Kuala Lumpur to Beijing in one of the most enduring mysteries in aviation history.

Five pieces of debris which have been identified as either definitely or probably from the jet have been discovered thousands of kilometers from the search zone — in South Africa, Mauritius, Mozambique, Maldives and the island of Reunion — likely swept there by currents.

Australia, Malaysia and China have said the hunt they have jointly organized would likely be abandoned if nothing is found in the search zone.

In a weekly operational update, the ATSB said three ships continue to seek the plane but winter weather has set in with giant waves and high winds hampering efforts.

The Australian added that in the event the plane is not found, the ATSB is working on a report looking at other possibilities, including the “rogue pilot” theory that the captain deliberately crashed it into the sea.