Donald Trump to make stop in nation’s most Hispanic state 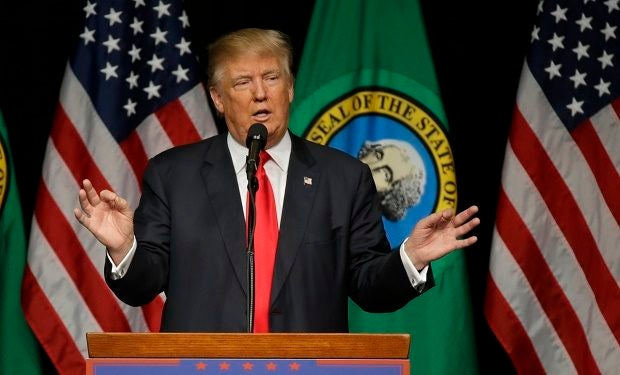 In this photo taken May 7, 2016, Republican presidential candidate Donald Trump speaks during a rally in Spokane, Wash. Trump kept himself planted firmly in the political spotlight this week with one headline-grabbing move after another, launching a social media defense of his treatment of women, listing possible Supreme Court nominees, rapidly declaring an Egyptian plane crash an act of terrorism. His likely general election opponent, Hillary Clinton, seemed content to hang in the background. AP

ALBUQUERQUE, New Mexico — Republican presidential hopeful Donald Trump has scheduled his first campaign appearance in New Mexico — the state with the highest percentage of Hispanics in the nation and where its GOP Latina governor has previously denounced him.

His campaign website announced Thursday that Trump will hold a rally Tuesday evening at the Albuquerque Convention Center as New Mexico prepares for its primary two weeks later on June 7.

Trump’s scheduled visit to the state comes after New Mexico Gov. Susana Martinez, the nation’s first Latina governor and a rising star within the GOP, has harshly criticized his past statements about Mexican immigrants and Mexico.

Trump has vowed to build a wall along the US-Mexico border and last year he compared Mexican immigrants to rapists and drug dealers.

Martinez has urged comprehensive immigration reform and asked candidates to tone down their rhetoric amid strong anti-immigration sentiment from some fellow Republicans.

Martinez has said she wasn’t ready to support Trump but wanted to hear about his plans to protect the state’s military bases. Martinez is a prominent Republican fundraiser in New Mexico and nationwide as chairwoman of the Republican Governors Association, a fundraising arm of the GOP.

A spokesman for Martinez said he didn’t know if the governor would attend Trump’s Albuquerque rally.

Richard Berry, Albuquerque’s Republican mayor who was twice elected with sizable Hispanic support, has not been contacted about attending the Trump rally, according to spokeswoman Rhiannon Samuel.

Latino and immigrant rights groups have hinted that Trump and his supporters might see demonstrations when he makes his way to New Mexico.

“Let’s put it this way…we’re definitely not going to roll out the red carpet for him,” said Ralph Arellanes, chair of the Hispano Round Table of New Mexico. “You can expect to see something.”

Trump has drawn scrutiny from immigration advocates for saying he would push for the mass deportation of an estimated 11 million immigrants living in the country illegally. He also has said he would support requiring Muslims to register in a database.

Trump already has generated enthusiasm from Latinos to vote against him in November should he officially win the GOP nomination, said Isaac De Luna Navarro, a communications organizer for the Albuquerque-based immigrant rights group EL CENTRO de Igualdad y Derechos.

“Donald Trump will realize during his visit to New Mexico that he doesn’t represent the values shared by New Mexicans and that his use of anti-immigrant rhetoric isn’t welcome by New Mexican families,” Navarro said.

Other activists said they planned on attending the rally inside the convention center but would not say if they would interrupt the gathering as seen at other Trump rallies.

Democratic presidential candidate Hillary Clinton has not scheduled a visit to the state before the primary.

Victor Reyes, a spokesman for Hillary for New Mexico, said Trump’s view counter the beliefs of many New Mexico residents.

“Donald Trump can’t fool New Mexicans into thinking that he will have our best interests in mind when he compares Mexicans to “rapists” and “criminals,” has doubled down on his pledge to deport millions of immigrant families…and would continue to divide our country in the worst ways,” Reyes said.

READ: Obama slams Trump in speech: ‘Ignorance is not a virtue’

Read Next
Mirrors blamed for fire at world’s largest solar plant
EDITORS' PICK
Cebu City closes its borders
IATF: Food firms to operate with 50% of workforce during Luzon quarantine
BREAKING: 1,075 people in PH has coronavirus disease – DOH
UP-PGH wards for COVID-19 patients finished in 5 days
Style and music journeys with Claudia Barretto
DILG to stranded workers: ‘Stay where you are’ until Luzon-wide quarantine is over
MOST READ
BREAKING: 1,075 people in PH has coronavirus disease – DOH
Locsin blasts DOH for blocking entry of Chinese doctors
Another doctor dies due to COVID-19 in Cebu City, doctor-husband critical
Robredo raised P36.2M; bought, distributed over 30, 400 PPEs so far
Don't miss out on the latest news and information.

How Duterte spent his birthday while on self-quarantine