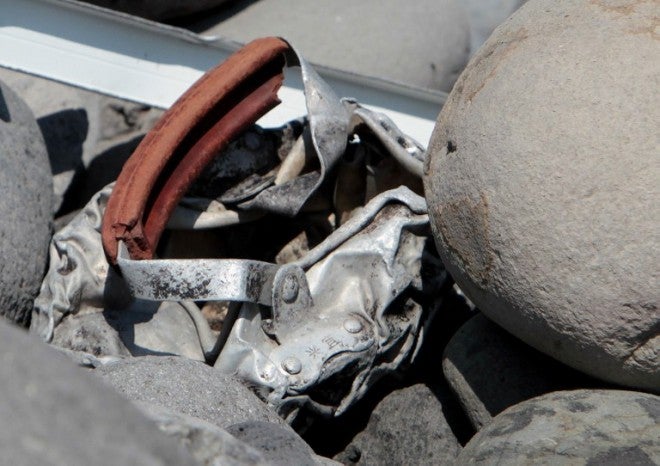 This picture taken on August 2, 2015 shows metallic debris found on a beach in Saint-Denis on the French Reunion Island in the Indian Ocean, close to where where a Boeing 777 wing part believed to belong to missing flight MH370 washed up last week. AFP PHOTO / RICHARD BOUHET

Malaysia has requested Maldives, Madagascar and Mauri­tius to assist in the search for Flight MH370.

The call for help was made to the three surrounding countries as France started scouring land, sea and air around Reunion Island on Friday.

Malaysian Transport Minister Liow Tiong Lai said the discovery of a flaperon at Reunion Island, the first physical proof of the plane since its disappearance, gave investigators fresh hope in locating the ill-fated plane.

Despite the significant find, Liow admitted that the disappearance of MH370 “is still a mystery”.

“We still need to get more debris, more data and more information,” he told reporters at SJK(C) Khai Mun Repas here on Saturday.

If more debris were found, Liow said it would help the Search Strategy Working Group in pinpointing the location of the plane.

“We rely a lot on the experts at the SSWG. They will continue to lead us in the second phase of our search,” he added.

MH370, with 239 people on board, disappeared en route from Kuala Lumpur to Beijing on March 8 last year.

The aircraft is believed to have ended its journey in the southern Indian Ocean.

Liow was present at the school to launch a “save energy campaign” organized by Sin Chew Daily and Tenaga Nasional Bhd.

Chai said that the French autho­rities and media organizations worldwide should rebuke and censure the satirical magazine’s cartoon that depicted a pilot’s dismembered hands groping the naked breasts of a flight stewardess with two people in the background cheering with the caption: “We found a piece of the pilot and the air hostess.”

“Where is Charlie Hebdo’s conscience and ethics?” asked Chai in a press statement.