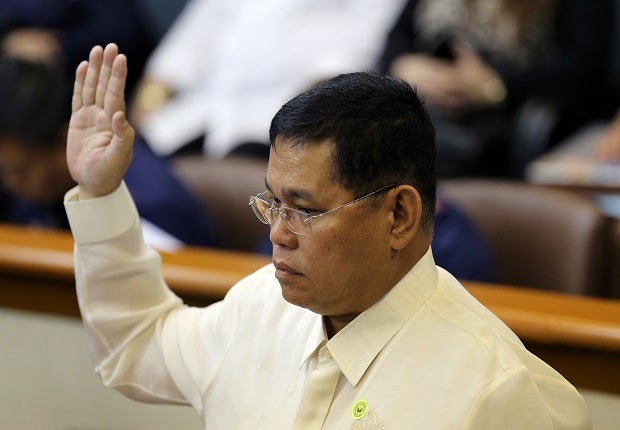 The Sandiganbayan has issued an arrest warrant against dismissed Philippine National Police (PNP) chief Alan Purisima as he faces a graft charge for an anomalous courier deal in 2011.

In a resolution dated May 18, the anti-graft court Sixth Division said it found probable cause to try Purisima for graft and thus issued the arrest warrant.

“After judicious scrutiny and evaluation of the Information and resolution of the prosecutor, the evidence in support thereof and the records of the preliminary investigation attached thereto, the Court finds that sufficient grounds exist for the finding of a probable cause and for the issuance of a warrant of arrest against all the accused,” the court said.

The court thus rendered moot and academic Purisima’s motion to quash his graft charge and defer the arrest warrant.

Purisima–a friend of President Benigno Aquino III–and 16 others were charged with one count of graft for acting allegedly with manifest partiality, evident bad faith and gross inexcusable negligence when they awarded the courier contract to the firm Werfast Documentary Agency, Inc.

Purisima entered into a memorandum of agreement (MOA) with Werfast and accredited the firm as the PNP’s courier service provider for all the firearms license applications despite its failure to comply with government regulations on courier services.

Salud is the president of Philrem Services Corp., the money remittance firm at the center of the alleged money laundering scheme in February this year, where at least $81 million were allegedly stolen from the Bangladesh Bank by hackers and stashed in the Philippines. Salud faces a money laundering complaint before the Department of Justice.

Graft is a bailable offense upon the posting of a P30,000 bail bond for each count.

Earlier, the Ombudsman dismissed Purisima, Petrasanta and other officers for the administrative offense of grave misconduct, serious dishonesty and grave abuse of authority. The officials forfeited their retirement benefits and were barred from being reemployed in government.

The Ombudsman’s investigation also showed that Werfast engaged the services of LBC that cost P190 for deliveries within Metro Manila and P290 outside, while the other courier service providers only charge P90 within Manila.

The Ombudsman also found probable cause to charge Purisima and sacked Special Action Force (SAF) commander Getulio Napeñas with graft and usurpation of powers for violating the police chain of command in the botched anti-terror raid “Oplan Exodus” that resulted in the deaths of 44 elite cops in Mamasapano, Maguindanao. JE/rga