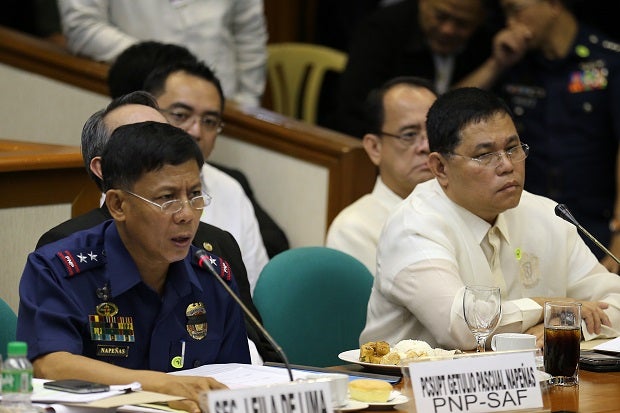 The Office of the Ombudsman has found probable cause to file charges against former PNP Special Action Forces (SAF) Chief Getulio Napeñas and dismissed PNP chief Alan Purisima over the Mamasapano massacre in January 2015 which resulted to the deaths of at least 63 people.

Ombudsman Conchita Carpio-Morales said that Napeñas and Purisima will face charges for Usurpation of Authority or Official Functions (Article 177, Revised Penal Code) and violation of Section 3(a) of the Anti-Graft and Corrupt Practices Act (Republic Act No. 3019).

In its 40-page Joint Resolution, Morales ruled that “during the period of Purisima’s suspension, he had no authority to perform the duties and functions, much less supervise and/or participate in the conceptualization, mission planning, and execution of a high risk police operation.”

Purisima has been slapped with a preventive suspension from December 2014 due to his involvement in the allegedly anomalous WERFAST courier service contract.

The Ombudsman said that, “Purisima was sending the unwritten yet visible message that he was, albeit he was not authorized to act and function as Chief PNP.”

“If Purisima had an iota of respect for the PNP Chain of Command, he should have informed, at the very least, of the details of the Plan Exodus during the turnover of his duties and functions to OIC-PNP Chief Espina,” Morales said.

On Napeñas’ part, the Ombudsman said that by acceding to Purisima’s orders, “[it] can be construed as an act in agreement to commit the crime of usurpation of official functions with Purisima.”

“[Napeñas’] justification to heed such order—that Purisima was the Commander-in- Chief’s most trusted man and was allowed by the President to participate in the planning and execution of the Oplan—does not lie,”  Morales said.

The Office of the Ombudsman provided a timeline of the events which started from the hatching of the Operation Terminator I and II to capture Malaysian terrorist Zulkiflo Bin Hir alias Marwan on November 2014.

Aside from criminal liability, Purisima and Napeñas were also found administratively liable for Grave Misconduct, Gross Neglect of Duty and Conduct Prejudicial to the Best Interest of the Service.

READ: Aquino: Purisima let me down

They were also meted with accessory penalties of perpetual disqualification for reemployment in the government service, forfeiture of retirement benefits and cancellation of eligibility.

Purisima has been dismissed from service in June 2015 while Napeñas has stepped down from his post in July 2015. JE