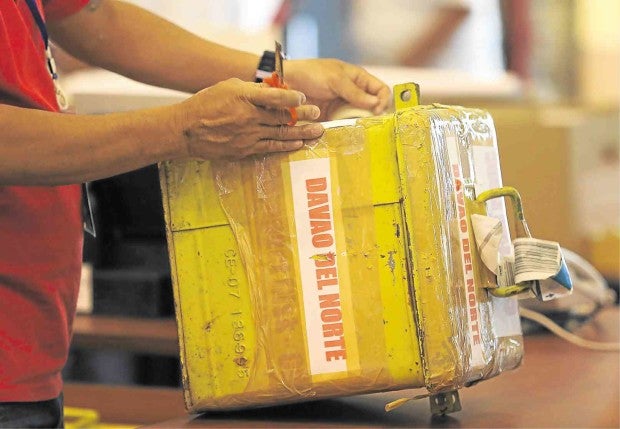 IN GOOD HANDS A member of the Comelec’s Reception, Custody and Safekeeping Group inspects a newly arrived ballot box from Davao del Norte at the national canvassing center at PICC in Pasay City on Friday. JOAN BONDOC

Retored Novaliches Bishop Teodoro Bacani Jr. visited the Parish Pastoral Council for Responsible Voting (PPCRV) center on Friday to give moral support to the volunteers who were counting the votes in Monday’s national elections.

“I came to congratulate the PPCRV volunteers for an excellent job in guarding the votes,” Bacani said in a telephone interview.

PPCRV volunteer Eda Delia Olmida was killed in an ambush while she was transporting election returns to a freight company in Pagadian City, Zamboanga del Sur province, on Monday.

Her 14-year-old son was wounded and taken to a hospital.

Another PPCRV volunteer, Ninoy Lanuza of Mandaluyong City, had a heart attack and died while serving in the quick count on Wednesday.

The PPCRV has recommended the investigation of the Commission on Elections’ technology partner Smartmatic for an unauthorized change in the hash code of the transparency server at the quick count center to correct a typographical error.

“We have to safeguard the system so this will not happen again in the next elections,” PPCRV spokesperson Anna Singson said, adding that it was unfair for losing candidates to question the integrity of the PPCRV’s independent count.

Singson said the Comelec should institute protocols on the system whether to authorize private IT operators to change the script of the transparency server without notice.

Representatives from the camps of Sen. Ferdinand Marcos Jr., who is losing the vice presidential race to Camarines Sur Rep. Leni Robredo, and senatorial candidate Francis Tolentino have been monitoring the PPCRV quick count at Pope Pius XII Catholic Center on United Nations Avenue in Manila since Tuesday.

Marcos urged the PPCRV to stop the quick count after Robredo overtook and left him far behind early on Tuesday. Tolentino remains stuck in the 13th spot in the senatorial race.

Singson said she had clarified with Comelec and Smartmatic officials the unauthorized change in the hash code, but she had not gotten a satisfactory reply.

She said there were nine representatives in the transparency server room at Pope Pius during the change but it was only the PPCRV IT expert who reported the alteration of the hash code.

“To hear accusations that we did not do anything about the change in script on the transparency server hurts, as our volunteers lack sleep and two have died,” Singson said.

Bacani said the Catholic Church was ready to cooperate with the administration of presumptive President Rodrigo Duterte.

He also expressed hope that Duterte’s officials and advisers would “influence him to work within the framework of human rights, particularly respect for human life and respect for the Constitution.”

During the campaign, the brash mayor of Davao City vowed to kill tens of thousands of suspected criminals outside the justice system to wipe out crime within six months of taking the presidency.

No anomaly in transparency server – PPCRV