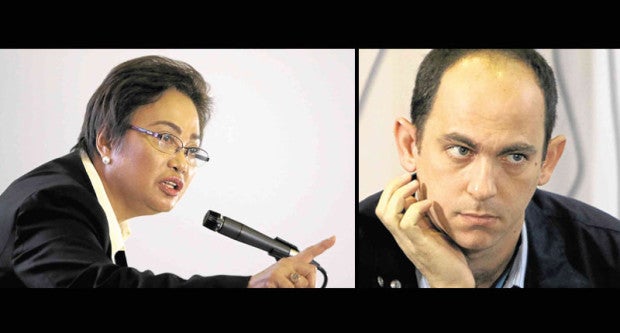 SMARTING An angry Election Commissioner Rowena Guanzon slams Smartmatic for its decision to change a computer script without Comelec clearance, a break in protocol for which Smartmatic project director and general manager Ellie Moreno looks properly chastened. PHOTOS BY RICHARD A. REYES

The Commission on Elections (Comelec) on Friday formed a committee to investigate its technology partner Smartmatic for the unauthorized change in the data packet for a transparency server that gave rise to accusations of fraud in the count of votes in Monday’s national elections.

The Comelec also restricted the access of Smartmatic personnel to the consolidation and canvassing system workstation at the Philippine International Convention Center (PICC) amid the uproar caused by the minor adjustment it made to the data packet for the transparency server of the Parish Pastoral Council for Responsible Voting (PPCRV) on Monday night.

Smartmatic, a Venezuelan information technology company, had no immediate comment on the Comelec moves on Friday.

The controversy began with Sen. Ferdinand “Bongbong” Marcos Jr. questioning on Tuesday his sudden loss of the lead in the count of the votes in the vice presidential race to Camarines Sur Rep. Leni Robredo after midnight on Monday.

Marcos was leading Robredo, the administration candidate, by as much as a million votes until midnight on Monday, but Robredo eventually overtook him on Tuesday and never looked back. She was leading the son of the late dictator Ferdinand Marcos by more than 200,000 votes as of on Friday.

READ: Leni to Bongbong: Complain to Comelec first before to media

On Wednesday, Marcos’ camp said a new script was introduced into the PPCRV transparency server that altered the hash codes of the packet data. The alteration, Marcos’ allies said, affected the vote count.

But Comelec Chair Andres Bautista said on Thursday that the change done on the data packet was just “cosmetic” and did not affect the vote count.

“I can categorically say there is no cheating,” Bautista said at a press briefing.

But other members of the Comelec were not satisfied, prompting an investigation.

Speaking at a news conference on Friday, Election Commissioner Rowena Guanzon accused Smartmatic of breaching protocol, saying its actions, which had no consent from the Comelec, warranted a formal investigation.

Guanzon said the investigative committee would be headed by the Comelec law department’s director, Norina Casingal, with Margareth Chin, head of the personnel department, as vice chair.

While relieved that the “unauthorized” action did not alter the counting of the votes, Guanzon stressed that Smartmatic should have not touched the program without approval from the full commission.

“What they should have done was [after seeing the] error, they should have informed the [full commission]—what is the problem, what are the consequences—and then give us recommendations on how to fix it,” Guanzon said.

Earlier, Guanzon staunchly opposed the Comelec’s collaboration with Smartmatic, writing a 10-page opinion against the awarding of the election automation project to the Venezuelan company, which had been the Comelec’s partner in the two previous computerized ballotings.

“This automated election system is not owned by Smartmatic. It is owned by the Comelec representing the people of the Philippines… They were not supposed to change anything without our knowledge and permission,” Guanzon told reporters on Friday.

The investigation was launched after Guanzon and other election commissioners, whom she did not identify, pushed for it to determine whether Smartmatic had liabilities under its contract and Philippine laws.

Guanzon said the penalties Smartmatic could incur may include withholding of its performance bond or its disqualification from biddings for future Comelec projects.

“We can assure you that the commissioners are going to study this and we will investigate even our people, if they have omissions there or malfeasance, we will get to the bottom of it,” she said

She said the Comelec would review its contract with Smartmatic and “see if the breach is enough to disqualify them from biddings [for] future contracts.”

“They have a performance bond that we can hold. I can also vote to refuse payment unless I am satisfied that the breach was benign,” she said.

In a separate press briefing, Smartmatic project manager Marlon Garcia, who was responsible for the minor adjustment, presented the data that contained the script changing the character “?” that appeared in the names of certain candidates to the special character “ñ.”

The data was personally retrieved on Thursday night by the Comelec from the PPCRV Transparency Center at Pope Pius XII Catholic Center on United Nations Avenue in Manila, witnessed by a representative from three news organizations, including the Inquirer.

Garcia pinpointed where the new script was put in and how it substituted the “?” in the data with “ñ,” explaining that a file system in English could not recognize or understand what the Spanish special character meant.

He also said the minor adjustment caused the hash code to change, but stressed that this was separate from the hash codes of the vote-counting machine, the automated election system and other applications.

Garcia also said that since his action involved a minor cosmetic change “from the engineering standpoint,”  Smartmatic did not see the need to elevate the matter to Bautista or to the full Comelec.

Operational or technical matters were brought to the attention of the Comelec’s project management team or the information technology department, he said.

But if actions were to create a big impact on the platform and cause financial repercussions, they have to be authorized by the full Comelec, he added.

“That has been the standard practice throughout the deployment of this project since Day 1,” Garcia said, adding that Smartmatic could not access the system without the other half of the passcode only known to the Comelec.

The minor change in the script was introduced around at 7 p.m. on Monday when an IT technical staff member of an online news network at the PPCRV center called the attention of Comelec IT officer Rouie Peñalba to the presence of a  “?” in the names of some of candidates where the letter “ñ” should have appeared.

Based on Smartmatic’s report to the Comelec, Peñalba notified the Smartmatic technical support team led by Garcia about the concern and the group solved it by correcting the script in the presence of everyone at the PPCRV center.

But Guanzon was unhappy about Garcia’s “attempt to interpret the provisions in the contract” as well as the “cavalier fashion” of his explanation of the incident, as if no damage had been done.

“There may have been no damage in terms of the alteration of the results but there is certainly some effect because now the people are anxious and asking the question,  ‘Could this have been done in the past elections?’” she added.

She said that even if the minor adjustment had “benign” effects on the vote count, it has “significant effect” on the people’s psyche, especially amid the tight race between Robredo and Marcos.

The National Movement for Free Elections (Namfrel) acknowledged that the change introduced by Smartmatic was “cosmetic” and did not affect the vote count, but said the people who made the change should be reprimanded.

Namfrel member Eric Alvia said the Smartmatic IT group’s action was a “serious breach of protocol” and it was now raising questions about the integrity of the elections.

Lito Averia, another Namfrel member, said the change did not in any way affect the Comelec’s central server or the data generated from the vote-counting machines.

But he lamented that “certain protocols were not followed.”

“What should have happened, if there was something that needed to be changed, no matter how simple, it should have gone through a change management board for approval,” Averia said.

With the controversy heating up, the Comelec restricted the access of Smartmatic personnel to the national canvassing workstation at PICC on Friday.

In a letter to Smartmatic general manager Elie Moreno, Election Commissioner Christian Robert Lim said the national board of canvassers had sole and absolute control over the workstation at the PICC.

“Your personnel shall not be allowed to access the [workstation] without specific prior authority from the [national board of canvassers] or the project monitoring office. In any case, access to the [workstation] shall always be under the direct supervision of duly designated Comelec personnel,” Lim told Moreno.

Lim, head of the steering committee for the 2016 elections, said Smartmatic should also get his approval before examining any election equipment.

“[I]n the spirit of utmost transparency, follow the protocol of announcing any action to all parties present before undertaking [the action],” he said.

A copy of the order was sent to Smartmatic IT team head Garcia. With reports from Tina G. Santos and Kristine Angeli Sabillo, Inquirer.net/TVJ

No anomaly in transparency server – PPCRV