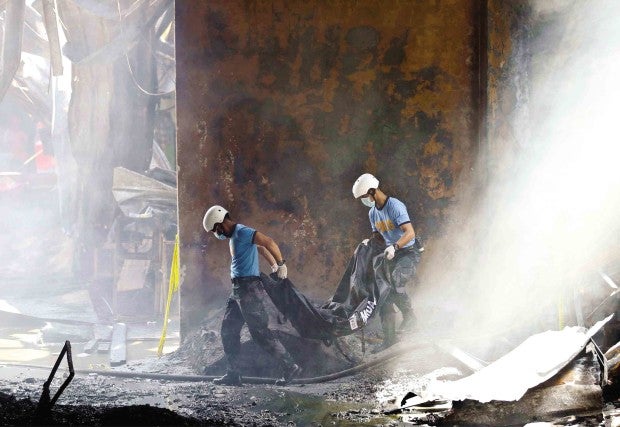 A year has passed since the Kentex footwear factory fire that killed 72 people in Valenzuela City, but justice remains elusive for the victims’ families, who now hope to obtain it under the incoming administration.

The group Justice for Kentex Workers Alliance called on presumptive President Rodrigo Duterte to apply his promised anticrime and antigraft campaigns to the company and government officials being called to answer for the May 13, 2015, inferno.

“What we received only was financial help. This is not the proper compensation for the crime that was done to us. And we don’t believe compensation equals justice,” the group said in a statement sent out by Ammied Rada. “To all those who supported us, thank you very much! But our fight goes on.”

“No one has been held accountable so far,” said Remigio Saladero, a lawyer representing a group of families who had filed charges in the Valenzuela City Prosecutor’s Office and the Office of the Ombudsman.

In the prosecutor’s office, they sued the respondents for reckless imprudence resulting in multiple homicide in June 2015. But it was only in February this year that Saladero received notice that the Department of Justice (DOJ) would be the one to conduct the preliminary investigation of the case.

“It’s already May and the respondents have yet to submit their counteraffidavits,” Saladero said on Friday. He also noted that while the complaints were filed on behalf of the majority of the aggrieved families, the DOJ notice only covered the cases of 15 victims.

The rest of the cases, he said, had yet to be assigned to a prosecutor. “They should have consolidated the cases instead,” Saladero told the Inquirer.

According to the lawyer, he wrote Justice Secretary Emmanuel Caparas last month requesting him to act fast on the remaining cases, but he has yet to get a reply from the DOJ.

“He is about to leave office (with the change of administration). We hope that the government expedites this because it might take years before we attain justice, just like the case of the Ozone victims,” Saladero said.

He was referring to the Ozone disco fire in Quezon City that killed 162 people and injured 93 others in March 1996. The ensuing trial in the Sandiganbayan ended in November 2014 with the conviction of seven former City Hall officials and two company executives, all sentenced to 10 years in prison.

Gatchalian and Guan, together with City Fire Marshal Mel Jose Lagan, Senior Insp. Edgrover Oculam, fire safety inspectors Rolando Avendan and Ramon Maderazo, were charged with violation of the antigraft law and reckless imprudence resulting in multiple homicides and physical injuries. Also included in the charge sheet filed in the Sandiganbayan are Renchi May Padayao and Eduardo Carreon of the BPLO.

Gatchalian was also ordered dismissed by the Ombudsman but he managed to secure a temporary restraining order against the directive. The mayor won a fresh term in the May 9 elections.

Saladero said his clients had accepted P151,200 each in compensation from Kentex, but they still pressed charges against the company officials. “A settlement does not affect the criminal case since the offended party here is the state, not the individual,” he added.

There are also more than 50 cases pending in the National Labor Relations Commission (NLRC) in connection with the fire, stemming from Kentex’s violation of labor laws, the lawyer added.

The NLRC had resolved 11 cases so far, ordering Kentex to pay P50,000 to P125,000 per complainant, depending on the worker’s length of service, he added.