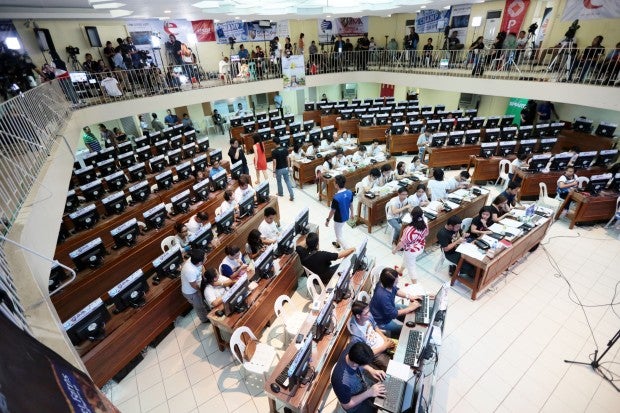 Volunteers at the Parish Pastoral Council for Responsible Voting (PPCRV) Command Center in Manila man their respective workstation as they wait for election results transmission on Monday, May 9, 2016. INQUIRER PHOTO / GRIG C. MONTEGRANDE

The Election watchdog, Parish Pastoral Council for Responsible Voting (PPCRV), on Thursday said at least 1.4 million votes had yet to be transmitted, mostly from overseas and conflict-stricken parts of Mindanao where there had been a failure of elections.

PPCRV spokesperson Anna Singson said the number of votes still to be transmitted and counted would increase further with the holding of special elections tomorrow in parts of Mindanao where Monday’s elections failed.

The PPCRV said votes from Filipinos in the Middle East,  Africa, North and Latin America and Asia had yet to be transmitted and counted.

“Only those embassies and consulates with manual voting takes some time to count,” Seguis said.

Embassies and consulates that used the automated election system have already transmitted the votes to the Commission on Elections (Comelec), he added.

Based on the PPCRV data, at an 80-percent turnout rate, the total number of local votes that have not yet been transmitted is expected to reach 1 million.

Overseas votes that have not yet been transmitted are those from Filipinos in the Middle East and African regions, which had 165,287 registered voters.

Votes from Filipinos in the Americas numbering 77,081 and some parts of Asia numbering 145,577 have also not yet been transmitted and counted.

The DFA said 7,269 voters cast ballots at the Philippine Embassy in Bahrain from April 9 to May 9. The voter turnout represents 39.30 percent of the 18,497 Filipino voters there.

Ambassador Victoria Bataclan said voter turnout in Belgium and Luxembourg was a high 61.13 percent, with 1,189 of the 1,945 voters there casting ballots.

The Philippine Embassy in Australia said the voter turnout there was high at 42 percent, with 3,367 of the 7,866 Filipinos voting.