Bongbong thanks Miriam for backing claim on rigged survey numbers 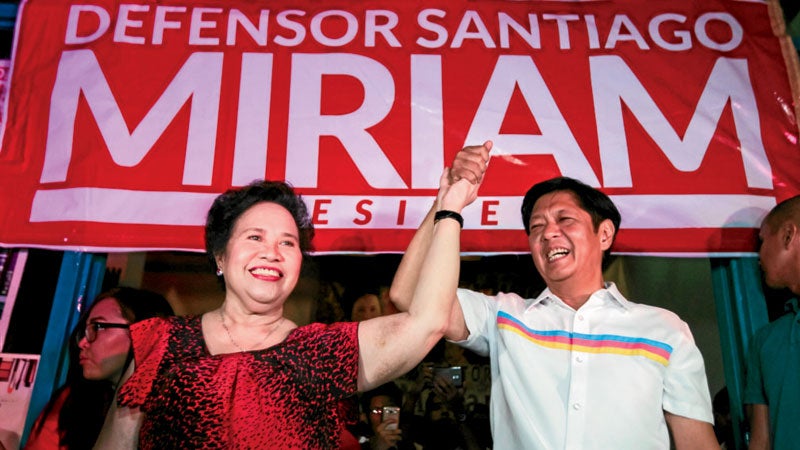 Sen. Ferdinand “Bongbong” Marcos Jr. on Wednesday thanked his running mate Sen. Miriam Defensor Santiago for supporting his earlier claim that the administration rigged the surveys to dislodge him from the vice presidential race.

In a statement on Wednesday, Marcos said his running mate supported his claim that the administration rigged the survey results days before the elections to show that its candidate Camarines Sur Ma. Leonor “Leni” Robredo surged into a statistical tie.

“I thank my Presidential running mate, Senator Miriam Defensor Santiago for her statement in support of the concern we raised earlier on the apparent manipulation of survey results in a bid to mislead the people into believing a supposed last-minute surge in the popularity of Administration candidates,” Marcos said.

Earlier, losing presidential candidate Santiago accused the government of “manipulating” the survey results to make Robredo in a statistical tie with Marcos days before the May 9 national elections.

“The roller coaster ride of vice-presidential candidate Ferdinand Marcos, Jr. invites comparison with a garrison state. In such a state, the authoritarian government feels free to manufacture numbers as they are needed,” Santiago said.

Marcos said the manipulation of the survey results only substantiate “Plan B,” allegedly concocted by the Liberal Party to rig the elections to make Robredo win and then have unofficial count presidential frontrunner Davao City Mayor Rodrigo Duterte impeached in a bid to have the Liberal regain control over Malacañang.

“As we warned earlier, this could be part of a plot to mask efforts to rig election results,” Marcos said.

He said the results of the unofficial count by the Commission on Elections (Comelec) server that shows Robredo leading Marcos by over 200,000 votes contradicting the survey results where Marcos was leading “give substance to our concern.”

“We all know Miriam for her intelligence, integrity, independence and courage. And so when she speaks, we should listen,” Marcos said.

While Marcos decried being cheated by the Liberal Party to maintain hold in Malacañang, Robredo said it was unfair for Marcos to accuse her of cheating without substantiating it.

“Napakaunfair na masabing nandadaya na hindi mo naman sinasubstantiate (It’s so unfair to accuse someone of cheating without substantiating your claim),” Robredo said in a press briefing on Tuesday. RAM