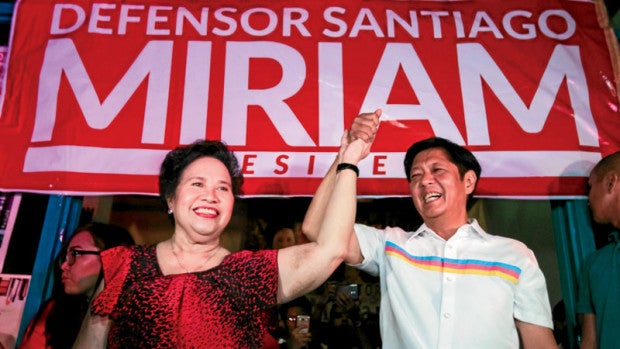 In a statement on Wednesday, Santiago, who placed last in the unofficial count, called the administration an “authoritarian government” which can “manufacture” the numbers of her running mate.

She did not elaborate if she was referring to the unofficial count or even the vice presidential surveys, which showed Robredo surging close to Marcos at the tail end of the campaign period.

“The roller coaster ride of vice-presidential candidate Ferdinand Marcos, Jr. invites comparison with a garrison state. In such a state, the authoritarian government feels free to manufacture numbers as they are needed,” Santiago said.

The cancer-stricken senator said she found it “astounding” that her running mate led in the vice presidential surveys for several months when suddenly the administration “jumped up” the survey results of Robredo to overtake Marcos.

“I find it astounding that Marcos should have led in the vice-presidential surveys for many months, until the penultimate month, when suddenly the administration could jump up survey results to finally overtake him,” Santiago said.

She said the alleged manufacturing of numbers will “cause the peoples of the democratic world to shake their heads and question the values of the society it produced.”

The unofficial count from the Commission on Elections server showed Robredo surging past Marcos with a slim margin of 200,000 votes.

While Marcos decried being cheated by the Liberal Party as part of its “Plan B” to maintain hold in Malacañang, Robredo said it was unfair for Marcos to accuse her of cheating without substantiating it. CDG