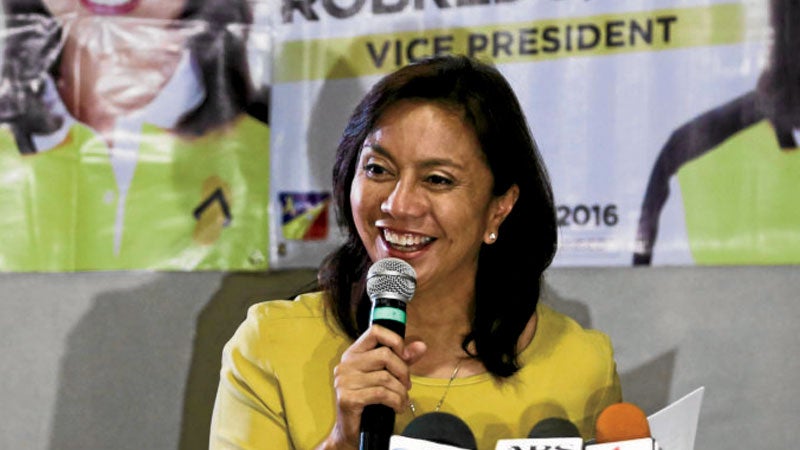 NOW LEADING the vice presidential race by a hairline, a cautiously optimistic Leni Robredo faced the press on Tuesday, refusing to claim an early victory but thanking supporters for putting the post within her grasp.

The 51-year-old widow of former Interior Secretary Jesse Robredo was leading Sen. Ferdinand “Bongbong” Marcos Jr. by a little over 230,000 votes as of 8:45 p.m. on Tuesday, after trailing the senator by almost a million votes at the close of polling on Monday.

Robredo got 13,779,757 votes, with 94.08 percent of precincts counted, based on the partial, unofficial count of the Parish Pastoral Council for Responsible Voting (PPCRV).

Marcos, who was a close second with 13,546,701 votes, accused the Liberal Party (LP) of manipulating the election results.

But PPCRV spokesperson Anna Singson said there was no basis to question the integrity of the election results, as her group’s data come from the Commission on Elections (Comelec) itself.

Singson said more than 7 per cent of votes had not been transmitted.

“There are still 2-4 million votes that have not been transmitted and counted. The number is very material,” she said.

“Let’s wait for the official results from the Comelec. Whatever the outcome, let’s  respect it,” she told local and international journalists at the Microtel Hotel in Eastwood City.

Based on the PPCRV count, Robredo got many of her votes from Luzon, including her home province in the Bicol region, as well as from Cavite, Batangas, Rizal and Quezon.

Even with three other rivals claiming roots in the Bicol region, Robredo had a sizable lead with 95.08 percent of election returns processed, over fellow Bicolanos, Senators Francis Escudero, Antonio Trillanes IV and Gregorio Honasan II.

Expectedly, Robredo lost to Marcos in Eastern Visayas, the home region of the former first lady, Imelda Romualdez Marcos.  But even there, the Camarines Sur representative lost by only a little more than 55,000 votes. 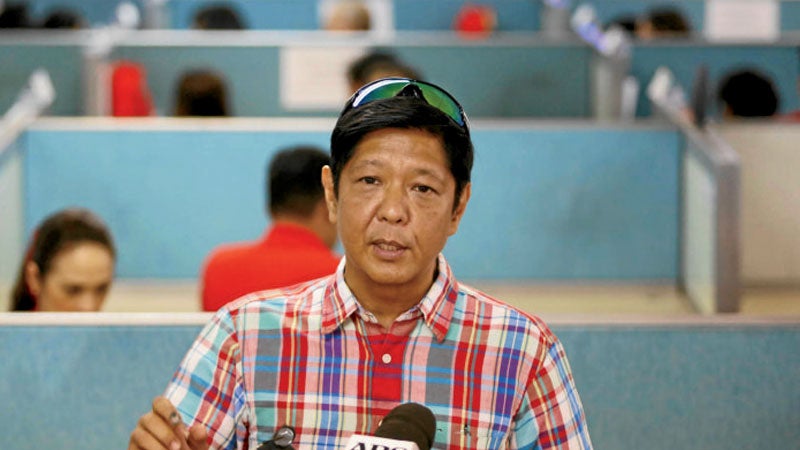 Marcos, who lost his huge lead overnight, said Robredo’s lead indicated that the “Plan B” of the LP was in full swing.

“It looks as if they have proceeded with Plan B because they are stopping the transmittal of votes from my bailiwicks. It is as if they are showing that Representative Robredo is leading,” Marcos said in a statement, quoting reports from his supporters.

He said a number of results from northern Luzon, particularly from Isabela and Pangasinan provinces, had not been reflected in the partial and unofficial PPCRV quick count.

He also claimed that election operators in Mindanao were trying to manipulate election results in the ARMM.

The problem with the quick count, Marcos added, was that it does not specify where the votes came from.

Such moves, Marcos said, were a manifestation of the LP’s Plan B to install Robredo as Vice President, so she could take over once the party had ousted Davao City Mayor Rodrigo Duterte from the presidency.

‘No truth to this’

In her press conference on Tuesday, Robredo denied that there was a Plan B to impeach Duterte. “There’s no truth to this,” she said.

Aside from the Plan B rumor, Robredo also addressed another “false news meant to drive a wedge” between her and Duterte.

“First, that I would resign if Duterte won. In fact, a Facebook page was made to say this, and I already complained about it,” she said, adding that her running mate, LP standard-bearer Mar Roxas, in a press conference earlier Tuesday, had already conceded the race to the Davao City mayor.

“And he asks us to support (Duterte) so we can achieve our collective goals,” Robredo said.

“My impression of (Duterte) last night was that he was for moving forward and healing the country. I have high hopes,” she said.

Robredo recalled how she and her daughters had felt depressed when rival Marcos led her by more than a million votes on Monday night.

But they were overjoyed when the gap slowly closed by 3:30 Tuesday morning, and even surpassed Marcos’ votes by about 600.

“It seems nothing (had been) handed to me on a silver platter… It makes victory sweeter,” Robredo said.

“We are certain that when the official canvass starts, we will emerge victorious. We are very certain,” Dela Cruz said in a press briefing, claiming that the exit polls of the Social Weather Stations (SWS) and other transparency groups had confirmed their own internal polling that showed Marcos getting 34.9 percent of the votes, compared with Robredo’s 32.2 percent.

The Bilang Pilipino TV5-SWS 2016 Exit Poll was conducted on Election Day using interviews with 45,123 randomly selected voters from 802 sampled voting centers. The national sampling error was expected to be below 1 percent, according to SWS.

“That is why this morning we requested, and we are reiterating our request, for the Comelec  to put an end to the unofficial canvass,” he said.

Dela Cruz said the request was meant to prevent a situation in which the unofficial quick count results and the official canvass of the National Board of Canvassers would differ and sow confusion and doubts on the election results. With reports from DJ Yap, Leila B. Salaverria, Estrella Torres, Jeannette I. Andrade, Nico Alconaba, Inquirer Mindanao, and Nestor P. Burgos, Jr., Jhunnex Napallacan, Ador Mayol, Carla P. Gomez, Leo Udtohan, Jani Arnaiz, and Joey A. Gabieta, Inquirer Visayas