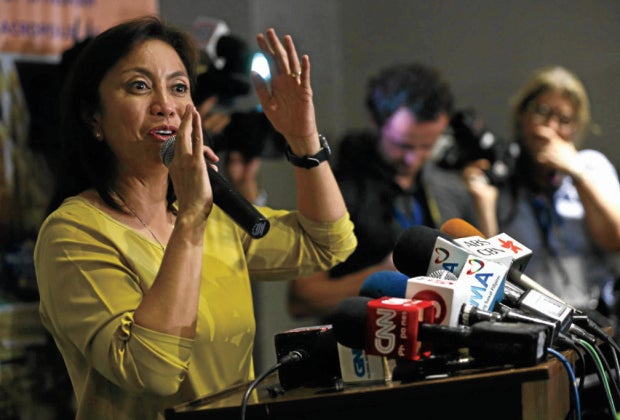 Liberal Party vice presidential candidate Camarines Sur Rep. Ma. Leonor “Leni” Robredo on Tuesday asked critics to substantiate the allegations that the ruling party is manipulating the results of the unofficial tally of votes from the Commission on Elections (Comelec) where she is leading.

“Napakaunfair na masabing nandadaya na hindi mo naman sinasubstantiate (It’s so unfair to accuse someone of cheating without substantiating your claim),” Robredo lamented in a press briefing at Microtel Acropolis in Quezon City.

Supporters of her closest rival Senator Ferdinand “Bongbong” Marcos Jr., even his son Sandro, are questioning the results of the partial tally from Comelec showing Robredo ahead of Marcos by more than 200,000 votes.

“There was a point in the quick count na tayo yung kulelat pero hindi tayo nambabato ng (where I was at the bottom but I did not throw) accusations,” she said.

Robredo said she’s interested to know how cheating in the counting of votes would be possible, pointing out that rigging votes in an automated electoral process without human intervention is not feasible.

Asked if she is ready to face an electoral protest when she assumes the vice presidency, she said, she never fought an easy fight.

“Nothing is ever handed to me in a silver platter. But it makes victory sweeter,” she said. RAM