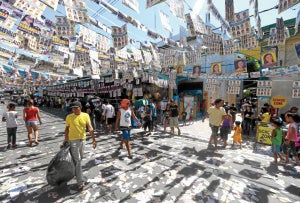 MANILA — Jaime Fresnedi was proclaimed  winner of the mayoral race in Muntinlupa City on Tuesday, amid protests by supporters of his rival Aldrin San Pedro.

Lawyer Allan Sindo,  chairman of the city’s board of canvassers, said Fresnedi garnered 125,128 votes of the total votes cast in 472 clustered precincts.

Ruffy Biazon, the former Customs chief, was proclaimed the representative of Muntinlupa City in the House of Representatives after he obtained 135,472 votes.

The proclamation around 8 a.m. took place even as several supporters of San Pedro barricaded the front of the city hall in protest against what they said was cheating in the local elections.  The barricade started Monday night.

“How can you explain (San Pedro) not  winning in Barangay Bayanan? It’s impossible for him to have lost! That’s his bailiwick!,” Jo Lugaya, who took to the streets as early as 8 p.m. on Monday, said.

“How could he have lost in Bayanan? Many of us voted for him there!!” Editha Villanueva complained.

Hundreds of San Pedro’s supporters occupied a part of the national highway in front of the city hall, causing a massive traffic jam.

At one point, some of San Pedro’s supporters stopped two jeepneys from transporting ballots–reportedly for auditing purposes in the Treasury Office— to city hall.

Some shook one jeepney carrying passengers, while others jumped on the hood and sat  or stood there.

“Walang aalis! Walang aalis (Nobody leaves! Nobody leaves)!” the crowd shouted, as they taunted a few Fresnedi supporters who were trapped inside the city hall, where the canvassing took place.

Rep. Rodolfo Biazon, father of the younger Ruffy, was among those seen in the city hall compound.

Only a line of shield-wielding police, who exercised “maximum tolerance,” separated the two rival camps.

At one point, the unruly crowd threw rocks at the Fresnedi supporters, and this prompted the board to ask the National Capital Region Police Office for additional policemen who could escort election inspectors from  26 precincts to the city hall.

The BEIs were supposed to manually transmit on Monday night the SD cards containing around 6 percent of the remaining votes that could not be electronically transmitted.

They were escorted safely inside the city hall in the wee hours of Tuesday, around 4 a.m., after which the canvassing of votes resumed, Sindo said.

After the proclamation, Fresnedi supporters were dispersed by the police, who bombarded them with water.

But Elma Nantes of Barangay Cupang vowed they would file a protest with the Comelec main office to “put a stop to the cheating.”

“We were cheated in the last elections, we just allowed (Fresnedi) to stay for three years. Now they are doing it again? We can’t just sit and do nothing,” she said.  SFM/rga