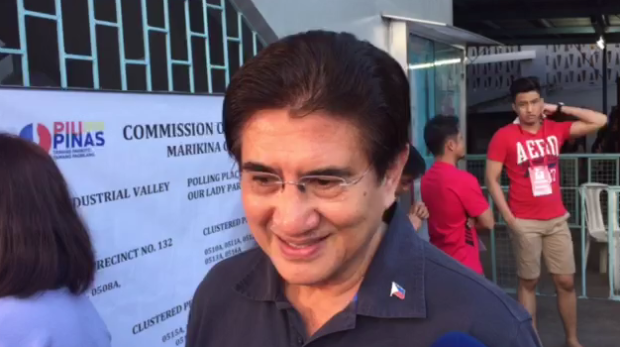 Sen. Gringo Honasan on Tuesday congratulated unofficial count frontrunner Rodrigo Duterte and the other candidates who won in the 2016 elections, urging them to heal the country from the wounds of politics for the sake of the children’s future.

Honasan made the statement when asked for his reaction about placing last in the vice presidential race according to the latest unofficial count of the Commission on Elections (Comelec) Transparency Server.

“To Mayor Rody Duterte and all our national and local candidates–please accept our prayers and congratulations,” Honasan said in a text message.

Honasan said he hoped the winning candidates may be guided by  “wisdom, courage, compassion and vision” from God “to help heal unite and lead the Filipino people towards a brighter future.”

Honasan said he hoped Duterte and the other winners would help the country’s future “for the sake of our most precious God-given next generation of citizens and leaders: our children.”

Honasan was in last place as the running mate of  United Nationalist Alliance (UNA) standard bearer Jejomar Binay, who placed fourth in the latest unofficial count despite his  statements that he would lead the presidential election.

As their candidates lagged in the unofficial count, UNA accused the Liberal Party of being behind the supposed  disenfranchisement of voters supporting Binay.

Binay refused to concede before midnight Monday, issuing a statement that he would wait for the final count of the elections and respect the outcome. CDG/rga