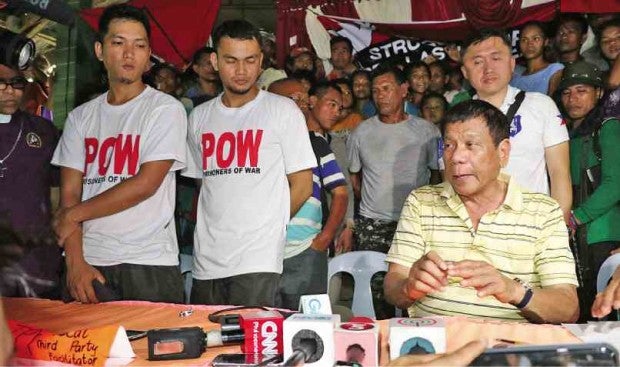 RELEASED Pfc. Diven Tawide and Pfc. Glenn Austria, who were held captives by the New People’s Army for a month, are turned over to Davao City Mayor Rodrigo Duterte and other local officials in a remote village in San Luis, Agusan del Sur province. BARRY OHAYLAN / CONTRIBUTOR

SAN LUIS, Agusan del Sur—Communist rebels freed three Army soldiers and a militiaman from captivity and formally turned them over to Davao City Mayor Rodrigo Duterte and other city officials in a ceremony in a remote village here on Tuesday.

Two of the government troopers, Pfc. Diven Tawide and Pfc. Glenn Austria of the 23rd Infantry Battalion, were separately taken at road checkpoints set by the New People’s Army (NPA) in San Luis and Talacugon towns, in Agusan del Sur province on April 3.

The decision to also free Cpl. Jawad Awadi and militiaman Roy Perez was reached at the last minute during the handover program, according to Ka Omar Ibarra, custodial officer of the NPA. They were caught in civilian clothes earlier in the morning by the rebels who were securing the vicinity of the venue in Barangay Balit here.

Duterte arrived late afternoon on a private helicopter for the turnover ceremony and was the last signatory in the release papers of Tawide and Austria. The soldiers were handed over to the Army’s 402nd Brigade at its camp in Bancasi, Butuan City.

The release of the captives was worked out by third-party facilitators led by church leaders from the Philippine Ecumenical Peace Platform and local government officials, in coordination with the Philippine National Police, Armed Forces of the Philippines and the NPA.

Tawide and Austria, in separate interviews, said they were treated humanely during their monthlong captivity. But Ibarra said they had to contend with the hardships of walking through the hinterlands of the neighboring provinces of Agusan del Norte and Agusan del Sur.

Ibarra lambasted the Philippine Army for not presenting to the public one of its NPA leaders, identified as Ricardo Manili, alias Ka Joker, and six other civilians who were seized at a military checkpoint in neighboring Esperanza town.

Ka Joker, who was supposed to lead the turnover rites, was arrested in the area still covered by the agreement on suspension of military operation to pave the way for the smooth release of the NPA “prisoners of war,” he said.

In a press statement, the 401st Army Brigade confirmed the arrest of Manili at a military-police checkpoint in the far-flung village of Remedios in Esperanza. The rebel, who was among those riding in a Starex van, was caught after a brief chase after it tried to make a sudden U-turn near a checkpoint set up by the Commission on Elections.

Capt. Jasper Gacayan, spokesperson of the military unit, identified Manili as the NPA commander of the subregional committee 3 of North Central Mindanao Regional Command and concurrent secretary of Guerrilla Force 4A, and had standing warrants of arrest for multiple murder, arson, robbery and homicide committed in Agusan and nearby provinces.