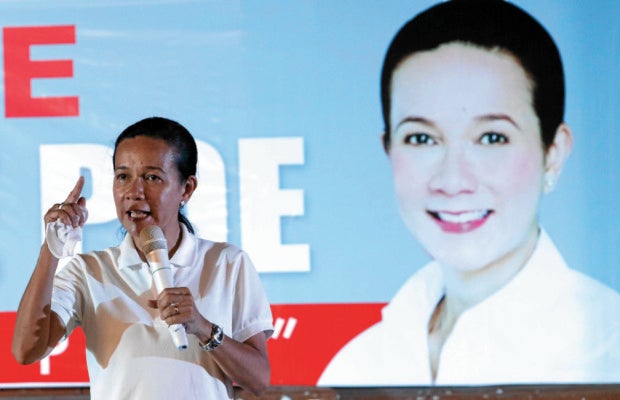 Sen. Grace Poe delivers her speech during a campaign rally in Tarlac City.

(Update) TARLAC CITY — Senator Grace Poe signed a waiver on Monday allowing the opening of her bank accounts, “covering the years of her incumbency as public servant of the Republic of the Philippines.”

Poe served as chair of the Movie and Television Review and Classification Board from 2010 to 2012 before she was elected senator in 2013.

The waiver, a copy of which was furnished to the media through email, also stated that she would only waive her right during the duration of her candidacy for president.

“Nag-sign na ako ng waiver e (I have signed a waiver),” Poe said when asked in an interview here if she would take on Davao City Mayor Rodrigo Duterte’s challenge that he would only open his bank transactions if his rivals would do it first.

READ: Duterte willing to disclose bank records up to 20 years but…

(In my waiver, it says that since I’m pushing for the Freedom of Information, I support this. It should be revealed, especially in my incumbency as a public servant.)

Poe chairs the Senate committee on public information and mass media that approved the proposed FOI bill. The measure was passed on third and final reading in the Senate but not at the House of Representatives.

(I said, if there is just cause, this document will be shown and if the Ombudsman thinks it should be opened, then it will be opened.)

In the waiver, Poe noted that as chair of her committee, she championed the passage of Senate Bill 1733 also known as the “People’s Freedom of Information Act” as part of her advocacy to institutionalize transparency and accountability in all government transactions and operations.

This is in line, it said, with the landmark principle enshrined in the 1987Philippine Constitution that “pubic office is a public trust.”

“Consistent with this advocacy for transparency and accountability, I hereby authorize the Ombudsman to look into my bank accounts if she finds just cause, hereby waiving my right of confidentiality under the bank secrecy law in favor of the Ombudsman, for the duration of my candidacy for president,” the waiver said.

“The waiver of such right shall cover the years of my incumbency as public servant of the Republic of the Philippines,” it further said.

Poe’s spokesman, Valenzuela Mayor Representative Rex Gatchalian, said the senator issued the waiver as an “answer to the challenge posed to all the candidates.” JE 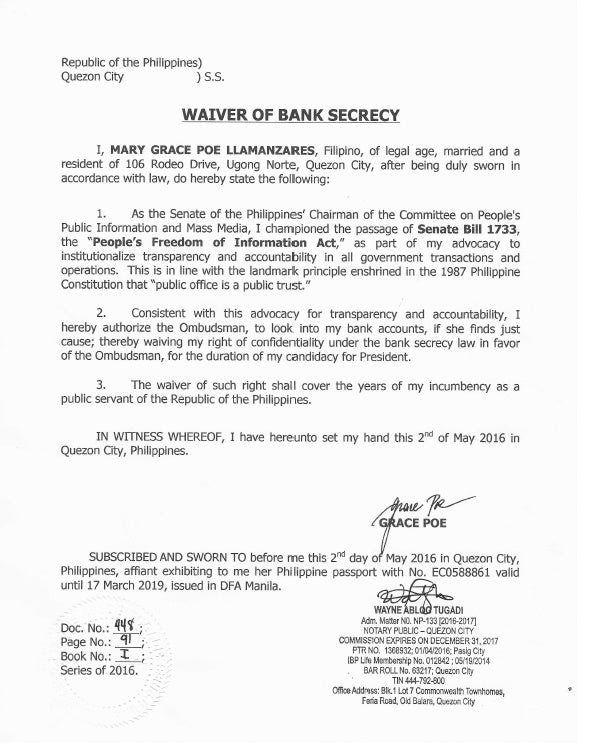