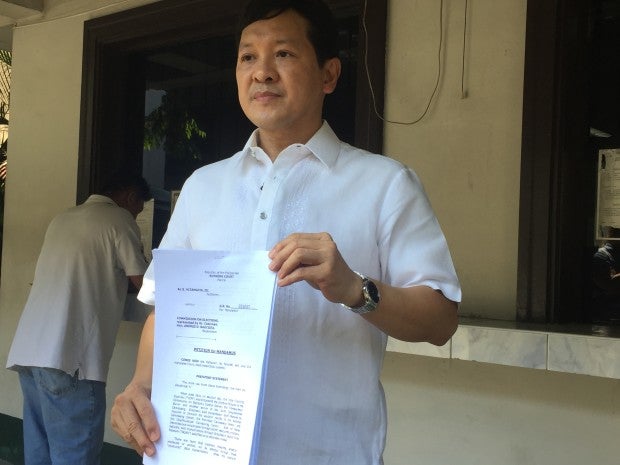 Former MRT General Manager Al Vitangcol III on Monday asked the Supreme Court to order the Commission on Elections (Comelec) to take precautionary steps to prevent electronic cheating, including an inventory of identification numbers of machines it will use during the May 9 national polls.

In his 17-page petition, Vitangcol said the high court should require the Comelec to make a list of all the IP (Internet Protocol) and MAC (Media Access Control) addresses that it will use in its Virtual Private Network, together with their geographical locations that will be used on May 9.

“We want to know these details so that in case there will be electronic cheating, there will be a way to trace it,” Vitangcol told reporters.

A MAC address is a globally unique identifier assigned to network devices. It is often referred to as hardware or physical address of the device while IP address is the numerical label assigned to each device participating in a computer network.  MAC and IP addresses are like fingerprints of individuals.

In 2010, Vitangcol noted that there have been reports that some 60 units of Precinct Count Optical Scan (PCOS) recovered in the house of a Smartmatic-TIM technician in Antipolo City, Rizal.

There were allegations that the “rogue” machines were used to manipulate the results of the elections.

“However, nothing can be ascertained because Comelec does not have the records of the MAC addresses of their legitimate PCOS machines and computers nor the list of IP addresses that were assigned to the devices during the 2010 elections,” Vitangcol said.

“Without such inventory of MAC addresses and IP addresses, the public–even respondent Comelec — would end up scratching their heads, wondering what went wrong,” he added.

On May 9, when the election closes, the Vote Counting Machines (VCMs) will transmit the election returns to the Comelec’s Central Server, the Transparency Server and another server at the Joint Congressional Canvassing.

Vitangcol said there is a risk that a sniffer could capture the data transmission.

“Transmissions from these ‘rogue’ machines would have been easily traced in the transmission logs, particularly through their MAC and IP addresses… Clearly, respondent Comelec must act now and lay the groundwork to prevent it from happening. Part of this groundwork is to make a thorough inventory of all the MAC and IP addresses,” the petition stated.

Vitangcol’s petition came following the leak of data of over 50-million voters, posted on a data dump and made searchable through wehaveyourdata.com.

Some sectors fear that that leak could be used to cheat during the May 9 polls. RAM