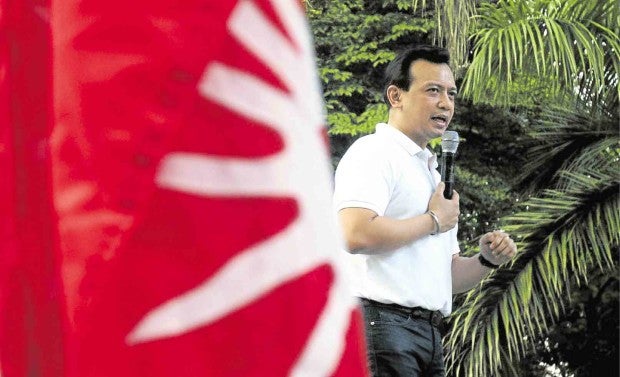 His detractors may call it “hubris” or “shameless audacity,” but the austere and hard-nosed persona that Sen. Antonio “Sonny” Trillanes IV maintains in public hearings, media interviews and even spontaneous photo ops reflects what this political gadfly has always believed in: His job as lawmaker is no laughing matter.

“Not a day passes without his staff telling him to smile more often. But he really takes his job seriously,” explained wife, Arlene, a retired military officer and former professor at the Philippine Military Academy (PMA). “I have always wondered why people see him as arrogant when he says something, but do not portray his colleagues as such when they do the talking,” she added.

Trillanes first stepped into the political fray when he led more than 300 junior officers and enlisted men in the short-lived Oakwood mutiny in July 2003 to protest alleged corruption in the military under then President Gloria Macapagal-Arroyo.

Jailed on charges of rebellion, he ran a campaign behind bars and won as senator in 2007 with an impressive 11.13 million votes. Three years after President Benigno Aquino III granted him amnesty, he was reelected senator in the 2013 midterm elections with 14.13 million votes.

But the latest prepoll surveys that show Trillanes at the bottom seem to indicate that Filipino voters are not as keen on the senator’s vice presidential bid.

In fact, critics have described as a hatchet job meant to boost his poor ratings Trillanes’ corruption exposé against presidential candidate Vice President Jejomar Binay and his recent disclosures on the alleged undeclared millions of presidential contender and Davao City Mayor Rodrigo Duterte.

Wife Arlene believes otherwise. “He is really a fatalist. He says that if he wins, it is his destiny. But if he does not, so be it.”   In fact, she added, she had pleaded with the senator to forgo his bid for a higher position so he could  get some peace and quiet and focus on their two teenage kids.

“His response was that he won’t be able to live with the fact that people are suffering while our family may be doing fine,” she said.

Trillanes’ chief of staff, Rolando Averilla, also pointed to a likely source of support for the senator’s VP bid: The Samahang Magdalo which, Averilla said, has evolved from being a band of rebels into an organization of 506,000 card-carrying members in over 500 chapters across the country.

Politics was never in Trillanes’ mind in his younger years. A late bloomer, he entered the PMA when he was almost 20, just a few months before finishing his Bachelor of Science degree in Electronics Engineering at De La Salle University in 1991.

“He was bright but did not stand out in class or draw attention to himself,” recalled Melba Balicanta-Talabis, his former English teacher at Angelicum School in Quezon City, where he attended high school. She described her former student as relentless, who had the confidence to engage teachers in a discussion whenever he had misgivings about a certain topic or lesson in class.

“I always saw him in the library doing research. He was not the type to just say ‘yes’ to whatever his teachers said,” Talabis added.

He excelled in his Math subjects, said Francis Caoili, his Math professor at the PMA, although he would occasionally get called out for falling asleep in class following a tedious field training, “He was competitive but serious and quiet. It’s hard to get exempted from an exam here (at the PMA), but he would get exempted often,” recalled the 62-year-old instructor.

Close friends and kin said the senator’s gruff exterior had been largely shaped by his late father, retired Navy Capt. Antonio Trillanes Sr. of PMA Class 1959, whose roots are from Ligao City in Albay. While it was the elder Trillanes’ desire that his son take up engineering because of his aptitude in math, the youngest in his brood of five displayed apparent interest in things military from childhood.

He would play with his toy soldiers when not hanging out with the neighborhood kids in Caloocan City or serving as altar boy in their local parish, said elder brother Tony. “But we didn’t see anything during Sonny’s childhood that could have predicted his role in the Oakwood mutiny or his entry into politics. He was very private and shy. It must have been his PMA training that developed in him those ideals and principles he’s now standing up for.”

Averilla, also Trillanes’ best friend, remembered how, as high schoolers, they would hang out a nearby bookstore after a quick bite at McDonald’s on Quezon Avenue, so the senator could devour the hardbound military books he could not afford. “He was interested about the military but it manifested a bit late,” he added.

Trillanes also helped in the rescue of 32 passengers when the ill-fated MV Princess of the Orient sank at the height of a typhoon in 1998.

The senator’s official website noted that prior to his Oakwood caper, Trillanes cleaned up the Naval Education and Training  Command’s procurement system as a procurement officer, and helped the government save more than P4 million in public funds.

His achievements were in sharp contrast to the young Trillanes’ early laid-back lifestyle that saw him regularly playing billiards, going to discos and meeting girls with best friend Averilla. In fact, this devil-may-care attitude initially prompted their father to steer him away from a military career, said Tony. “But when he saw (Sonny’s determination), he eventually gave way and even supervised his training and preparation for his PMA entry,” the brother recalled.

Trillanes’ wife once said that he pursued a military career to finally give his life a clear direction. “He felt that if he continued with his old ways, he would end up as nothing,” Arlene said.

To his supporters, Trillanes’ best achievements would be the 1,077 bills and resolutions he filed in the Senate, 52 of which were passed into law, and the uprisings he led to bring attention to alleged crooks in government.

But to wife Arlene, whom he met at the PMA when they were still both cadets, his being a good father trumps everything else. “I see how the kids really love him. They would always ask for their Papa whenever he was away,” she said, adding that underneath his tough shell lurks an affectionate man who wrote her tons of love letters when they were still a young couple.

He is also a doting father, who tends to spoil their teenaged children, Thea and Seth, as if to make up for lost time, she said. They were just 4 and 6, respectively, when the Oakwood mutiny happened. “The kids are really looking forward to life after politics. They pretend to be aloof to what is happening but social media can be harsh, and they get hurt by what people say about their Papa,” their mother said.

For Averilla, Trillanes can be serious to a fault, a burden that he would likely carry all his life. “He had set the bar high for himself and anywhere he goes, even if he exits politics, that will be his greatest challenge.”

Trillanes warns Cayetano: Don’t make me go after you

Trillanes to bat for DILG post if elected VP