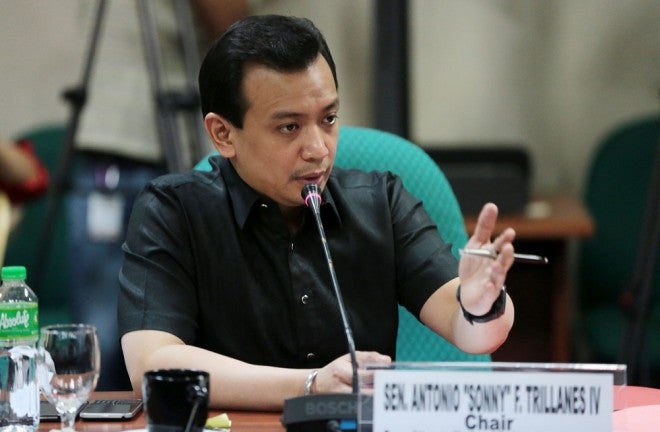 SEN. ANTONIO Trillanes IV’s own survey showed he continued to lag in the six-way vice presidential race with two months to go before the May 9 elections.

His military rebel group-turned-party-list, Magdalo, announced Sunday that Trillanes was in fifth place among the six vice presidential candidates in their March 4-6 survey.

The survey reportedly had Sen. Grace Poe, whom Trillanes has endorsed for president, in a tight race against Davao City Mayor Rodrigo Duterte for the top spot.

The Magdalo said it had been conducting monthly pre-election surveys for president, vice-president and senator since September.

In a statement, Magdalo party-list Rep. Ashley Acedillo said the Supreme Court’s 9-6 decision allowing Poe to run for president despite questions about her citizenship and residency should boost her survey standing.

He did not say how Trillanes could boost his own ratings.

Magdalo said that Poe was the choice of 31 percent of their nearly 3,000 respondents, while 29.5 percent went for Duterte.

With a margin of error of plus or minus 1.8 percent, the two were statistically tied.

The Magdalo said the survey showed a close vice presidential race between Senators Francis Escudero and Ferdinand Marcos Jr., who got the nod of 29.4 percent and 28.7 percent of respondents, respectively.

Trillanes’ 10.3 percent landed him in fifth place, ahead only of fellow former military rebel Sen. Gregorio Honasan with 3.8 percent.

Even if he loses, Trillanes will still be a senator with three years remaining of his six-year term. The same is true with Poe, Escudero, Cayetano and Honasan.

Santiago and Marcos, on the other hand, will be stepping down as senators on June 30.