DAVAO CITY—Now the stage is his.

Sebastian Duterte, 28-year-old son of presidential candidate Rodrigo Duterte, chose to be in the background during campaign sorties before he was appointed his father’s representative in his speaking engagements.

Baste, as he is known, said he had no choice but to accept the challenge since his brother, Paolo, has his hands full as vice mayor, while their sister, Sara, takes care of their mother, Elizabeth, who is battling cancer.

Baste made his first appearance at his father’s campaign rally in Bohol early last month, before he faced a bigger audience in Hong Kong.

“I really felt uneasy in Hong Kong because there were too many people—around 8,000 to 10,000,” said Baste, a businessman, surfer and musician who sports a lip ring and tattoos.

To coach him on the issues of the day, the young Duterte has sought the help of his former political science teachers at Ateneo de Davao University.

He said his father’s campaign team briefs him on important information, but his engagements are independent of the candidate’s.

Baste is father to a 5-year-old girl and a 1-year-old boy.

“They have different moms. I have been living for about three years now with the mother of my second child,” he said, adding that he was still saving up for the wedding.

Baste used to rent an apartment, but recently moved to a house near his father’s as the mayor wants to be close to his grandchildren. 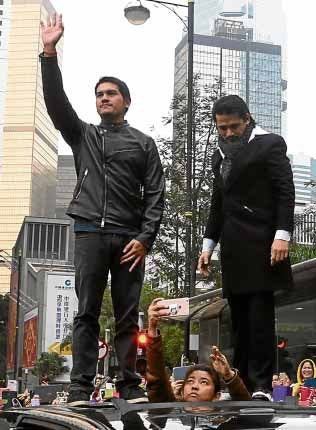 “He loves it when my son falls asleep on his chest. He talks calmly to him, telling him to be a good person when he grows up.”

Baste said his father has a unique way of guiding his children.

“He does not tell me what to do or what not to do. He is my father so I look up to him and I see him as my model. But I know if I’m in trouble when he calls my attention,” he said.

During his first years in high school at Ateneo de Davao, Baste said he lived with his father as his mother was in the United States, and brother Paolo had his own family and Sara was studying in Manila.

“My father and I did not get along. He easily got annoyed with me because I was a slowpoke and that was a phase when I used gel for hair spikes. And I also failed some of my subjects. That was when he told me, ‘Sebastian, I am telling you do not f**k with me.’ He sent me to Manila after that.”

In 2012, Baste passed the entrance exam for the San Beda College of Law. But the elder Duterte was not thrilled.

“Do not be offended by what I will say. I am not saying that you’re not smart, but you cannot survive law school with your style,” Baste quoted his father as telling him.

“Three months later I realized he was right that law school was not for me,” he said.

Still, Baste does not have plans of following his father’s political footsteps. For now, he just wants to campaign for him.

When pressed to comment on his father’s rivals, he said he did not have anything to say. “I should not speak ill of people I do not know.” Karlos Manlupig, Inquirer Mindanao