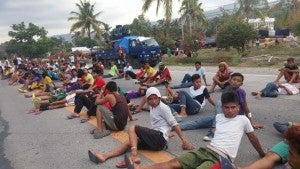 KORONADAL CITY – Drought-hit farmers, who have been staging a protest against the alleged government inaction on their plight since Friday here, have agreed to return home after officials gave them 2,000 sacks of rice on Monday.

“We will terminate our rally (Monday) but the farmers will stay overnight here and will go home (Tuesday, Apr. 26),” Joselito Roxas of the Kilusang Magbubukid ng Pilipinas (KMP) told reporters.

The Department of Social Welfare and Development in Central Mindanao turned over the rice to the farmers around 4:30 p.m. as police authorities backed away farther from the picket line.

“We are happy with this even if our demand for 15,000 bags was not granted, at least this initial aid will help us,” Roxas said, adding that each rally participant would bring home a sack of rice.

While Roxas was elated that rice had arrived, he said that the delivery from the DSWD only proved that the government had rice stock after all.

It was a puzzle, he said, why farmers had to stage a protest first before aid was given.

“We consider this as our victory,” Roxas said, following a dialogue with representatives from the DSWD, Department of Agriculture and the South Cotabato provincial crisis management.

“DA also promised to extend us fertilizers and other farm inputs and will be distributed in the farmers’ communities in the coming days,” Roxas added.

He said the protest was also peaceful and that they were thankful that no violent dispersal took place.

During the unloading of the bags of rice from at least three hauler trucks, the farmers were orderly. They were visibly overjoyed.