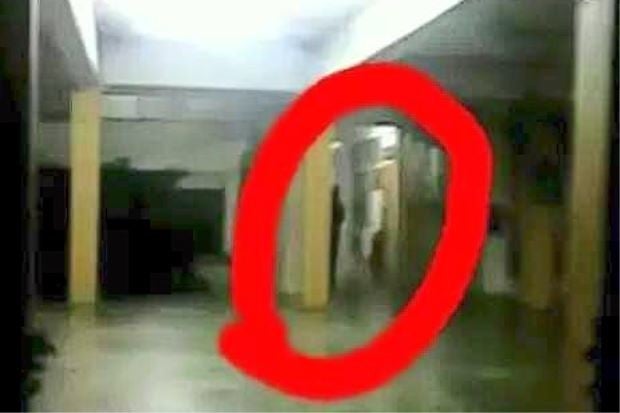 Mysterious sight: A figure, supposedly of the apparition, caught on camera by one of the school’s students PHOTO COURTESY OF THE STAR ONLINE/ASIA NEWS NETWORK

KOTA BARU — Eight more female students of SMK Pengkalan Chepa 2 were hit by hysteria after a prayer session to rid the school of bad spirits.

The girls were suddenly overwhelmed after two hours of reciting Quran verses and special prayers conducted by all the students at the school hall on Sunday.

The school was hit by mass hysteria last Monday, affecting more than 100 students–female and male–and teachers and it was shut down on Thursday.

The hysteria continued despite the attempts by several ustaz (Muslim scholars trained in Islam and Islamic law) to rid the place of spirits. It was learned that a Chinese shaman also came to the school to help.

Several students also managed to take pictures of a ghostly apparition captured in the canteen, hall and some of the classrooms.

A student claimed that a female student afflicted by hysteria jumped off a staircase but was saved by several male students.

“She is supposed to skip school (on Sunday). I don’t understand why she came after she was possessed,” she added.

A parent, Alzzah Sulaiman, 45, said she was called to take her Form Four daughter Nora Mohd Fauzi earlier after she became hysterical.

A student, who only wanted to be identified as Ina, did not come to school on Sunday upon advice by her parents.

“I can’t explain how I got possessed, but I couldn’t move and fainted before I was revived by an ustaz,” she recalled.

The media was not allowed into the school on Sunday. However, the reporters and photographers could hear the screams from outside the school gates at 11:30 a.m.

The journalists’ attempts to enter the school were unsuccessful as there was tight security around the area.

School principal Siti Hawa Mat and the district education department officials could not be reached for comments.

To date, more than eight ustaz, bomoh (Malay shaman), and Islamic traditional experts have come to help chase away spirits that are said to be in the school compound.