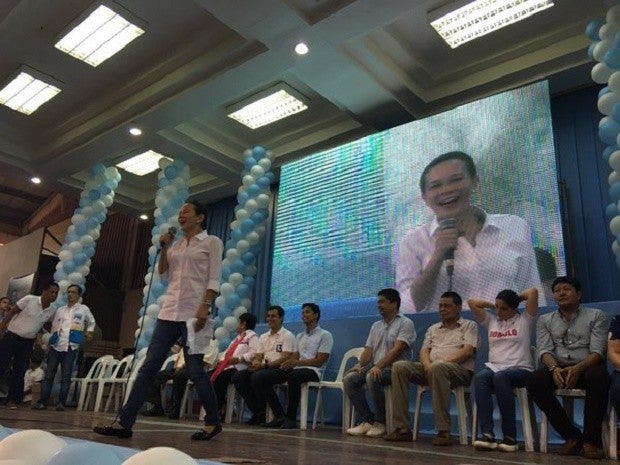 IRIGA CITY, Camarines Sur – Senator Grace Poe on Friday vowed to reduce, if not wipe out, poverty if she is elected president on May 9.

This was just among the many promises that Poe made when she spoke before thousands of residents here who gathered at the University of Saint Anthony.

(Fellow countrymen, the most difficult [problem] to battle is poverty. That is the root of our problems–corruption, crime and many others.

Because of my desire to help our countrymen, if I become president, I will ensure that over a million jobs will be created every year and that the ‘endo’ practice will be stopped.)

She reiterated her promise to provide free lunch for public elementary schools, free tuition for poor students in state universities and colleges, free hospitalization for poor patients, among others.

(Others may think why does Grace make so many promises? Why all [these free services]?

What the country needs, she said, is a president who has “energy,” compassion and a helping hand.

(That’s what I offer.

In my government, I will make sure that poverty will be reduced, at least if it’s not eliminated, because I will give every Filipino sufficient opportunity, work, and enough permanent income for your family.)

If Poe is elected president, former Governor LRay Villafuerte said help would be just a text or call away for Bicolanos.

(We are very close with Senator Grace Poe, with just a call or text, we can go to her home…

Let’s not waste our vote on candidates we can’t even approach.)

Villafuerte, who is running for congressman, then introduced Poe as the next president of the Republic of the Philippines.

Villafuerte was joined by his son, incumbent Governor Migz Villafuerte and other local officials in welcoming Poe in the province.

It was Poe’s first sortie in the province since the official campaign period kicked off on February 9. CDG