After 30 years of rivalry, UP political orgs unite vs Bongbong 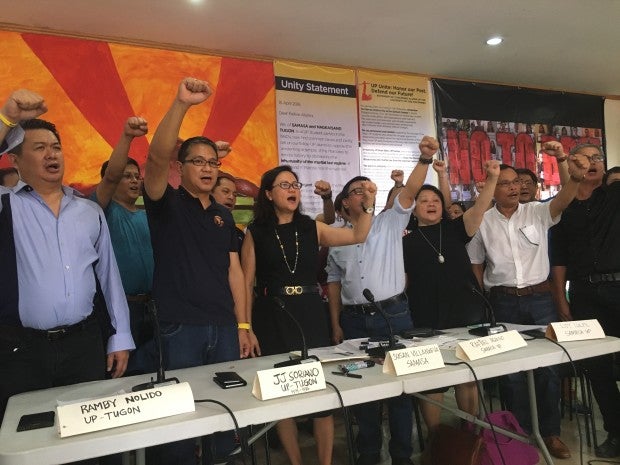 ‘NEVER AGAIN’ Members of two rival political parties from the University of the Philippines set aside their differences to oppose the vice presidential bid of Senator Bongbong Marcos. YUJI VINCENT GONZALES/INQUIRER.net

Three decades after serving as student leaders and activists with different stances on issues, never did they imagine that they would be sitting at one table.

The alumni of Sandigan para sa Mag-aaral at Sambayan (SAMASA) and Nagkaisang Tugon (Tugon), rival political parties at the University of the Philippines-Diliman in the 1980s, shunned their differences as they joined forces and took a united stand against the possible return of a Marcos in Malacañang—this time, in the person of the late dictator’s son and namesake, vice presidential candidate Senator Ferdinand “Bongbong” Marcos Jr.

But unity was not something new to these foremost rivals for UP student leadership. With leaders like Francis Pangilinan, Lean Alejandro, and Chito Gascon, both groups joined the protest actions against the Marcos dictatorship and mobilized students to rally in the streets.

Reminiscent of their mass movements and in honor of their common cause 30 years hence, the alumni of SAMASA and Tugon on Friday linked arms and chanted “never again” as they condemned the supposed attempts to “perverse” history amid the vice presidential bid of Marcos, who has been leading in nationwide preference surveys.

“We did not see eye to eye on many issues and approaches. But despite our differences, what binds us is our stand against any form of dictatorship,” said lawyer Susan Villanueva, chairperson of the UP SAMASA Alumni Association, in a press conference at the UP Vinzon’s Hall, which houses the student council headquarters.

In an expression of solidarity, SAMASA and Tugon recalled the martial rule as the “darkest chapter in recent Philippine history” and remembered the bravery of UP’s fallen heroes martyred by the dictatorship.

“We stand in solidarity with the academic community that has already spoken the truth by exposing attempts to whitewash the Marcos regime’s unrelenting violation of human rights, abuse of power, and plunder of the public coffers, and by presenting the dictatorship and martial law as they truly were: monstrous aberrations that should never re-emerge in our country,” the groups said in a statement.

They also called on fellow alumni of the country’s premier state university to “oppose unrelenting attempts of the Marcoses to rewrite history by obliterating the inhumanity of the martial law regime.”

The groups summarized their cause in four points:

-Condemn the attempts to whitewash the Marcos regime’s vicious violation of human rights, its abuse of power and its plunder of the economy;

-Support all efforts to ensure that all generations learn the real facts and lessons from the Marcos dictatorship to ensure it never happens again;

-Call on fellow UP alumni, especially those involved in the 2016 elections, to take a strong stand against the abuses of the Marcos dictatorship; and

-Oppose and resist any attempt to give Ferdinand E. Marcos a hero’s burial at Libingan ng mga Bayani.

JJ Soriano, founder of Tugon, expressed alarm over the Marcoses’ continuous refusal to acknowledge and apologize for the atrocities and human rights violations committed during their patriarch’s regime and return their ill-gotten wealth.

(Using the money they have obtained, they are able to twist history. Today’s youths think they are good people.)

Pressed about martial law during the vice presidential debate last Sunday, Marcos said he cannot apologize for anyone else and that he cannot give what he does not have.

‘Not a majority candidate’

Marcos himself claimed that his popularity in preference polls was due to the criticisms against him, which he said was being led by President Benigno Aquino III, son of the late democracy icons former Senator Benigno “Ninoy” Aquino Jr. and former President Cory Aquino. He also attributed his topping of surveys to Filipinos’ acceptance of his campaign message of “unity.”

But for SAMASA’s Villanueva, it was not appropriate to conclude that the dictator’s son would be the runaway winner for the vice presidency despite his frontrunner status.

“Umakyat si Bongbong Marcos sa survey pero hindi siya lumalagpas ng 26 percent. ‘Yun lang yata ‘yung bloke niya (Bongbong Marcos is rising in surveys, but not higher than 26 percent. That seems to be his threshold). He only has a minority support. The majority are actually divided among five candidates. He is not a majority candidate. He is not the candidate that will bring unity. He in fact represents division,” Villanueva said.

“When people started speaking against him, his numbers plateaued. He has met resistance, and we should continue that resistance. We should vow come May 9 that he shall not pass,” she added, exploring the possibility of being united behind one candidate to counter Marcos’ bid.

Commission on Human Rights (CHR) chairman Chito Gascon, a Tugon alumnus who served as student council chairperson, expressed his support for the groups’ cause and emphasized the need for “accountability, retribution, and closure” for martial law abuses.

(When we say never again, we mean never again to the abuses against human rights. We at CHR are cooperating in the campaign to promote democracy and human rights, and not partisan politics.)

“There has to be an accounting of what happened, retribution against perpetrators, and there has to be closure… [We need to] develop a clear narrative that is evidence-based so that the future generation will no longer doubt what happened in 1972 to 1986 as the darkest period in our nation’s history,” he added.

The Marcos family, who ruled the country for 20 years, was said to have amassed a total of $5 billion in ill-gotten wealth. Citing court records, the Presidential Commission on Good Governance said Senator Marcos blocked the return of his family’s ill-gotten funds to the Filipino people, particularly the US$40-million (P1.84 billion) Arelma account that was opened in Panama by his father on Sept. 21, 1972. IDL