Miriam: Pollsters have removed my name from survey forms 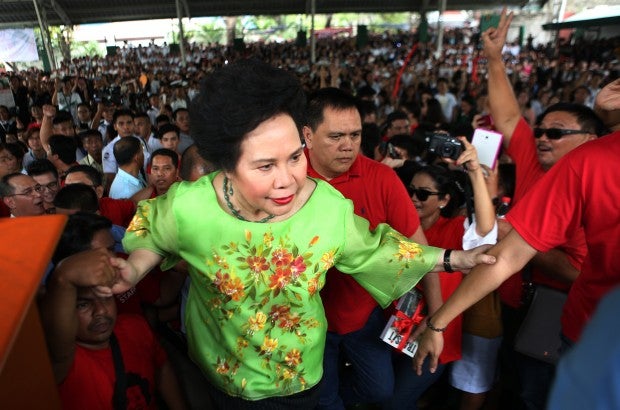 Presidential candidate Sen. Miriam Defensor-Santiago accused pollsters of removing her name from survey forms distributed to respondents, the reason why she was lagging behind in some surveys.

The lady senator, who did not specify the pollsters, has consistently placed fifth in some scientific surveys.

“No one believes surveys anymore because, in the first place, it’s all over social media that my name has been removed from some of the forms used in these surveys so that respondents would be forced to vote for other candidates,” she said.

The senator said that individuals who claim to have been respondents in some pre-election surveys alleged that they had to write Santiago’s name in the survey form because she was not among the choices, while others said they picked “Undecided” instead.

The senator urged the public against “mind-conditioning” by moneyed candidates and their wealthy supporters.

Santiago, a social media darling who is banking on the so-called youth vote, has topped several social media and campus polls.

She returned to the campaign trail on Wednesday at her hometown in Iloilo City after taking a monthlong absence for her anticancer treatment. She is scheduled to campaign at the Saint Louis University in Baguio City on Saturday. CDG

Read Next
Poe vows to curb poverty as president
EDITORS' PICK
Smart three-peats as country’s fastest mobile network – Ookla
Would the military allow me to stay this long if I’m inutile? – Duterte
In good spirits: SMDC helps farmers and residents through Kadiwa Market
Pre-order the new vivo Y20s [G] to get a free TWS earphone
65% of Filipinos say Duterte’s health should be made public – SWS
DSWD chief admits ‘slow start’ in distribution of aid in ‘NCR Plus’
MOST READ
Vico Sotto frets getting photos of ‘butt vaccination’ from Pasig dwellers
Metro Manila to have shortened curfew hours from 8 p.m. to 5 a.m. under MECQ
San Miguel Corp. continues to invest heavily in the Philippines’ future
COVID-hit Roque slams ‘un-Christian’ query on how fast he secured hospital bed
Don't miss out on the latest news and information.