Gov't is at war with Abu Sayyaf, and only the soldiers can fight them, President tells grieving widows
By: Nikko Dizon - Reporter / @NikkoDizonINQ
Philippine Daily Inquirer / 06:51 PM April 13, 2016 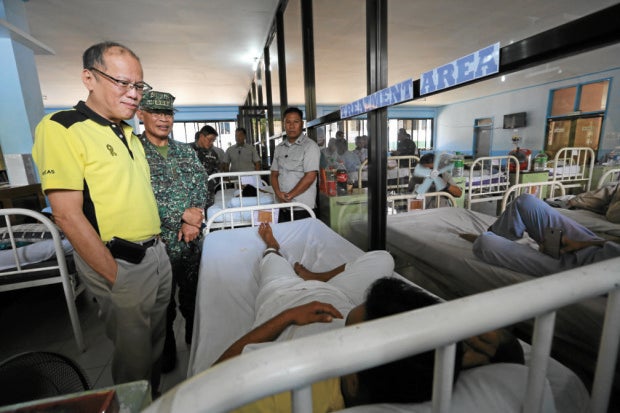 ZAMBOANGA CITY— President Aquino on Wednesday said that the government is “at war” with the Abu Sayyaf terrorist group, a longstanding security problem that he would like to end even with only a little over two months left in his administration.

At a dialogue with the families of the soldiers who were killed in an encounter with the Abu Sayyaf on April 9 in Tipo-Tipo, Basilan, the Commander-in-Chief said “I want to end” the suffering caused by the Abu Sayyaf to so many people, and the country’s soldiers would have to be the ones to go to the battlefield to fight for peace and security.

“The Abu Sayyaf has been our problem for the longest time. They have brought suffering to so many lives. I want to end this,” President Aquino said in Filipino.

In more ways than one, this was how the President explained to the grieving families why their loved ones gave up their own lives last April 9, ironically the day when the country commemorated the Fall of Bataan and the heroism of the Filipino and American soldiers during World War II.

President Aquino cited the bravery and the gallantry of the soldiers who died in Tipo-Tipo, Basilan over the weekend.

Eighteen soldiers were killed, the biggest single loss in an operation that the Armed Forces had suffered in recent history. More than 50 other soldiers were wounded.

President Aquino said that the military offensive in Tipo-Tipo were still going on as of Wednesday.  He called the offensive against the Abu Sayyaf “a major step in addressing terrorism” and ending the ruthlessness of the bandit group.

A family member, however, also asked the President why there was a high death toll in the encounter.

Iriberri said the military would look into it. But any investigation would have to wait for the military operations in Tipo Tipo to end.  The soldiers who know what transpired on April 9 are still in the battlefield, according to Iriberri.

Four days after the debacle in Basilan, the President arrived in Zamboanga City on Wednesday and spent the whole morning in this city to pay his respects to one of the slain soldiers and visited the other wounded personnel confined at the Camp General Navarro Hospital at the Western Mindanao Command (Westmincom).

Mr. Aquino landed at the Edwin Andrews Air Base (EAAB) at around 10 a.m. and proceeded to the wake of Corporal Rodelio Bangcairin at the latter’s home in Barangay Ayala.

The President then spent nearly an hour at the Camp General Navarro Hospital where he spoke with the wounded soldiers.

He was overheard trying to comfort one of the soldiers. With another soldier, the President was seen putting his hands on his neck, gesturing as if describing how he was shot in the neck during the 1989 coup d’etat against his mother, the late President Corazon Aquino.

Galvez relayed to the media the salient points in the President’s dialogue with the families, as it was a private meeting held at the Multipurpose Hall of the EAAB here.

All the President’s engagements here were off limits to journalists. The President also did not issue a public statement.

According to Galvez, the President opened and ended his dialogue with the families with an expression of sympathy for their loss.

A wife of a slain soldier asked the President how her son could follow in the footsteps of his father, according to Department of Defense spokesperson Peter Paul Galvez.

“The President responded to her by saying that he admired and saluted her mindset,” Galvez said.

Galvez said the President handed over to the families the checks from the Armed Forces.

The President also told the families that government would be ready to help them, but asked them to be specific in their requests so that government could respond to their needs quickly.

After meeting with the soldiers’ families, President Aquino had a brief working lunch at the EAAB before he proceeded to Laguindingan in Misamis Oriental for a ceremonial switch-on of a sitio electrification program.