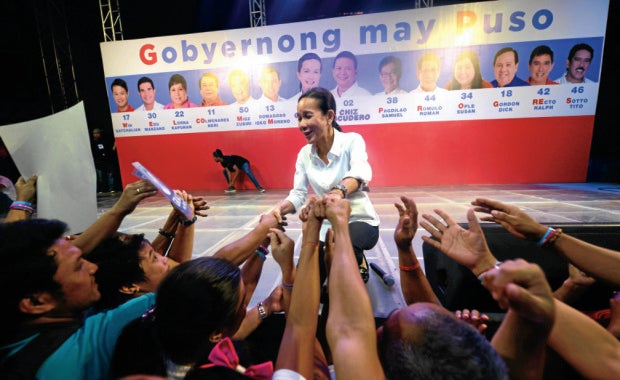 Leaving the choice up to the people’s sovereign will, the Supreme Court has upheld its March 8 decision to allow Sen. Grace Poe to run for President even as the justices continue to bicker over her qualifications.

Poe’s detractors should now wait until after the election—if she wins, they can bring their cases against her to the Presidential Electoral Tribunal (PET), the body that, according to the Supreme Court, has the authority to decide questions about a presidential candidate’s qualifications.

Poe said she felt “unshackled” by the court’s final ruling, as she was now free to concentrate on her campaign.

In a minute resolution released Saturday, the Supreme Court retained its 9-6 vote granting Poe’s plea against her disqualification, finding that the Commission on Elections (Comelec) had committed grave abuse of discretion in canceling her certificate of candidacy (COC).

“The court resolved, by the same vote of 9-6, to deny with finality the motions for reconsideration, as the basic issues raised therein have been passed upon by this court and no substantial arguments were presented to warrant the reversal of the questioned decision,” the  court said in its resolution released exactly a month before the balloting.

“No further pleadings or motions will be entertained,” the court said in a three-page notice released four days after the full court made its final decision on the case during its first summer session for the year in Baguio City.

While faced with persistent complaints and “vigorous attacks” by the dissenters, the majority said the court only had to rule on Poe’s grave abuse plea against the Comelec in the first place.

Citing remedies available under the Constitution, the majority said questions about Poe’s citizenship and residency may and should only be settled when the court sits as the PET through a quo warranto petition—a challenge to a person’s right to hold public office—if she is elected President.

The court, the majority said, should be kept away from politics and partisanship.

“The sovereign choice on who will be the next President of the Philippines must be respected by this court. Only after this choice has been made may we potentially step in,” Chief Justice Maria Lourdes Sereno said in her concurrence, referring to the court when it sits as the PET.

It was a rebuttal to Associate Justice Arturo Brion’s bristling criticism of the court’s chosen form in settling the case, saying it “clearly [indicates] that the majority was simply banking on the force of numbers.”

“The candidates must be allowed to move on; the electorate must no longer be distracted by the skirmishes before this court. It serves no good purpose for baseless howls of protest to amplify today’s ambient noise. No one is benefited except those who want to ‘game’ judicial processes for political ends,” she said.

Seeking to hush the “loud minority” of dissenters still asserting Poe’s lack of citizenship and residency qualifications, Sereno said parties against the senator may still ultimately challenge her qualifications at the PET.

“Indeed, regardless of the number of justices who have opined that petitioner is a natural-born Filipino, even if it were a near unanimity, the postelection remedy of quo warranto—should petitioner indeed win the presidency—will be available to proper parties on proper grounds,” Sereno said.

The Constitution “in very clear language has instituted postelection remedies to questions on the qualification of an elected President” and other top officials, she said.

“Because this remedy has been designed by the Constitution itself, it is not the place of the Commission on Elections to question the wisdom of the Filipino people who ratified a Constitution that provides such remedies. This court has no jurisdiction to render inutile a constitutional provision on the basis of [the] Comelec’s ‘fear of instability,’” she said.

In his concurrence, Associate Justice Marvic Leonen said Poe’s petitions against her disqualification only sought a ruling on whether the Comelec breached its authority in barring her candidacy.

“The Comelec’s insistence that the vote of this court should lay to rest all issues regarding petitioner’s qualifications is a misguided view of the availability of remedies to all voters, a misunderstanding of the difference between certiorari on the one hand and quo warranto on the other, or an attempt to have the Constitution amended so that this court would not be the ‘sole judge of election contests relating to … qualifications for President,’” Leonen said.

Explaining why the majority decided to stick to its March 8 ruling in favor of Poe, Sereno said revising the decision would have “authorized [the] Comelec to continue to play politics.”

Associate Justice Bienvenido Reyes believed otherwise, saying the court should not have excused a candidate from liability by claiming an honest mistake.

Reyes held that Poe is neither a natural-born Filipino nor a 10-year Philippine resident.

“Indeed, the lack of deliberate attempt to mislead, misinform or hide a fact from the electorate should not be allowed as a defense in a proceeding for the denial of due course to or cancellation of a COC… The qualifications of candidates should not be easily bargained away by the mere expedient claim of good faith,” he said.

Sereno scoffed at the dissenters’ insistence that Poe should be disqualified because there was no clear majority in the voting on whether she was a natural-born Filipino, and whether she had met the 10-year minimum residency requirement for presidential candidates.

The justices separately voted on the two substantive issues.

On citizenship, seven justices held that Poe is a natural-born Filipino, five dissented, while three opted not to take up the question.

On residency, seven favored Poe, six voted against her, while two did not take a position.

In a fierce attempt to dismantle the majority’s dominance, Associate Justice Antonio Carpio said there was “clearly no majority vote on the issue of the petitioners’ citizenship,” asserting that eight justices make up the majority on the 15-member court.

The senior magistrate is among three Supreme Court justices who, as members of the Senate Electoral Tribunal (SET), dissented from the majority ruling that upheld Poe’s natural-born status in a separate case.

The reconsideration plea on the SET ruling remains pending in the Supreme Court.

“The ruling of the majority will lead to an absurd result. The majority allows a presidential candidate with uncertain citizenship status to be elected to the presidency,” Carpio said.

He called the majority ruling “a mockery of the electoral process.”

Carpio also accused Sereno of excluding from the vote count the three justices who opted not to take a stand on the citizenship issue—Associate Justices Diosdado Peralta, Mariano del Castillo and Alfredo Benjamin Caguioa.

But Sereno said the vote of seven justices in favor of Poe “is not unimportant,” and that to belittle the vote “is offensive to the majority’s pride of place.”

“The reply to such position is simple: We are 7, you are 5.  Seven is a majority in a group of 12. It is time that this reality be accepted. Whether such majority position will be reversed in a quo warranto petition is a future matter, but the odds against its happening are quite telling,” Sereno said.

As unconvinced of Poe’s citizenship was Associate Justice Teresita Leonardo-de Castro, who scored the court’s reliance on “statistical probabilities” in ruling that Poe is a natural-born Filipino.

In his March 8 resolution, Justice Jose Perez cited figures that a child born between 1965 and 1975, the decade when Poe was born, is more than 99 percent likely to be a Filipino, based on figures that the Office of the Solicitor General had presented in court.

Poe was abandoned in a church in Jaro, Iloilo province, shortly after birth in 1968.

She was adopted later by movie actor Fernando Poe Jr. and his wife, actress Susan Roces, and became an American citizen in 2001.

“I cannot but passionately stress my disagreement [with] the ruling of the ponencia that petitioner Poe’s citizenship can be established by resorting to the use of statistical probabilities,” said De Castro, who joined Carpio and Brion in voting against Poe in the SET case.

Sereno balked at Brion’s view that the court itself gravely abused its discretion in allowing Poe to run.

In his dissent, Brion scored the ruling as “erroneous” while warning his colleagues against standing by a decision that “has been questioned by different sectors for the confusion it sowed.”

To Sereno, such view was “destructive of the rule of law.”

“Protests [against] the majority ruling, both by the dissenters and [by the] respondents, “rail against… the Constitution itself,” she said.

“Their main thesis is that a candidate cannot be allowed to run if there is doubt expressed by a loud minority about her lack of qualifications.  One of the dissenters (Brion) even characterized the court itself as having committed grave abuse of discretion,” she said.

“By their very words, they have arrogated to themselves a place above the court.  This is a brazen attempt at tyranny by a noisy part of the minority,” she said. With a report from Gil C. Cabacungan