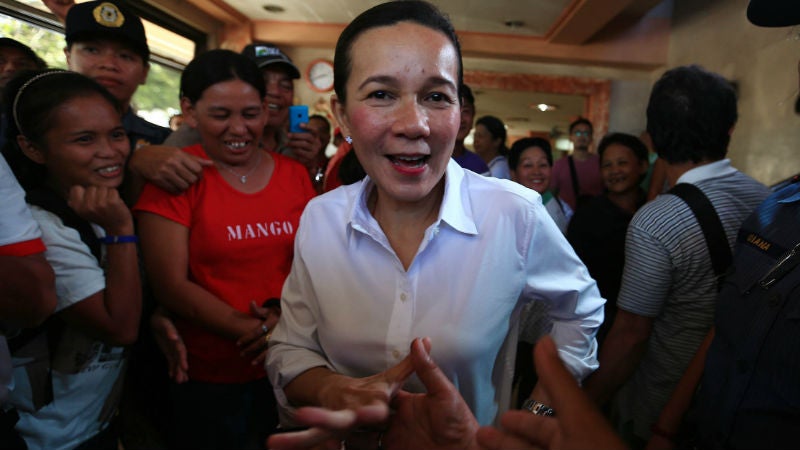 Removing the legal impediment to Poe’s candidacy, the Supreme Court Tuesday decided with finality to allow the senator to seek the land’s highest post, throwing out reconsideration pleas that the Commission on Elections (Comelec) and critics had filed to push for her disqualification.

During its first summer en banc session here this year, the high court junked all three motions for reconsideration against the high court’s March 8 ruling that had upheld Poe’s qualification as a presidential candidate, a court source told the Inquirer.

Court spokesperson Theodore Te  announced in his press briefing Tuesday that the court would make an official announcement on the motions on April 9, exactly a month before the May balloting. The court is also expected to release separate opinions that the justices will write on the final ruling by that time. However, Te did not disclose details of the decision.

Poe’s critics and legal experts have been calling for a speedy resolution of the case, given the consequences on the electoral process.

Tuesday’s ruling permanently voided Comelec’s resolutions that canceled the certificate of candidacy (COC) filed by Poe, who has been consistently topping preelection surveys.

While details of the ruling have yet to be released, the denial of the motions for reconsideration meant the high court had opted to uphold the majority decision, which said the Comelec had committed grave abuse of discretion in canceling Poe’s COC.

It has yet to be clear whether the justices held a revote on the merits of the case, particularly the thorny citizenship and residency questions that had hung over Poe’s candidacy.

In the March 8 landmark ruling penned by Associate Justice Jose Perez, the court said Poe “is a qualified candidate for President in the May 9 elections,” as she is natural-born and met the 10-year residency requirement for presidential candidates.

The court ruled that Poe, while a foundling of unknown parentage, was natural-born, as the 1935 Constitution had intended to include abandoned babies under this class of citizens despite the lack of an explicit provision on such inclusion.

Born in 1968, Poe is covered by the prewar Constitution.

The court also ruled that Poe, who became an American citizen in 2001 but reacquired her Philippine citizenship in 2006 and then renounced her US allegiance in 2010, had satisfied the 10-year minimum for the domicile of a presidential candidate, saying the reckoning date of her return to the Philippines should be May 24, 2005.

Poe had returned to the Philippines on that day, fully intent at reestablishing domicile in the Philippines and uprooting her family from the United States, the court ruled.

Poe’s critics contended that Poe may not be considered a natural-born citizen, and that she fell short of the residency requirement, having declared in her 2012 COC for senator that she reestablished domicile in the Philippines only in June 2006.

The respondents also cited the lack of a clear majority in the high court ruling, given separate votes on the citizenship and residency issues.

While the court voted 9-6 to cite Comelec in grave abuse of discretion, seven justices voted to declare that Poe is natural-born, five dissented, and three did not take part.

The court also voted separately on the residency question, with seven in favor and six against affirming that Poe had satisfied the residency requirement.

Only a majority vote—or eight out of the 15 high court magistrates—makes a ruling a legal precedent, the respondents had asserted.