VP bets urged to ‘come out of shadows’ in debate 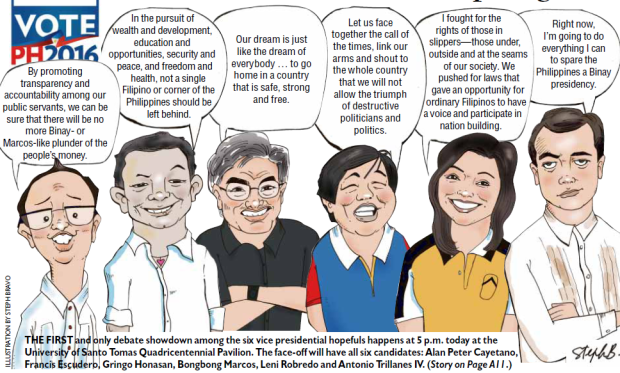 The Commission on Elections (Comelec) on Saturday urged Filipinos to watch the only debate among vice presidential contenders on Sunday to see them “come out of the shadow” of their presidential running mates and face the public as “viable choices.”

“We hope many people will watch it as many as those who watched the presidential debates. This is the first and probably only one that will be held for the vice presidential candidates so it’s a landmark occasion,” said Comelec spokesperson James Jimenez on Saturday.

The face-off among the six vice presidential candidates will happen at the University of Santo Tomas Quadricentennial Pavilion at 5 p.m. today.

READ: All 6 candidates to attend VP debate at UST

Jimenez encouraged the six candidates to give it their best during the debate so they could also show the importance of the post they are vying for.

“A lot of them are always in the shadow of their presidential candidate. Now is the time to have them come out of their shadow and stand before the public as viable choices,” said the Comelec official.

The vice presidential debate will be the third of the four debates initiated by the Comelec in partnership with various media organizations.

The last presidential debate will take place in Dagupan City on April 24, two weeks before the May 9 election.