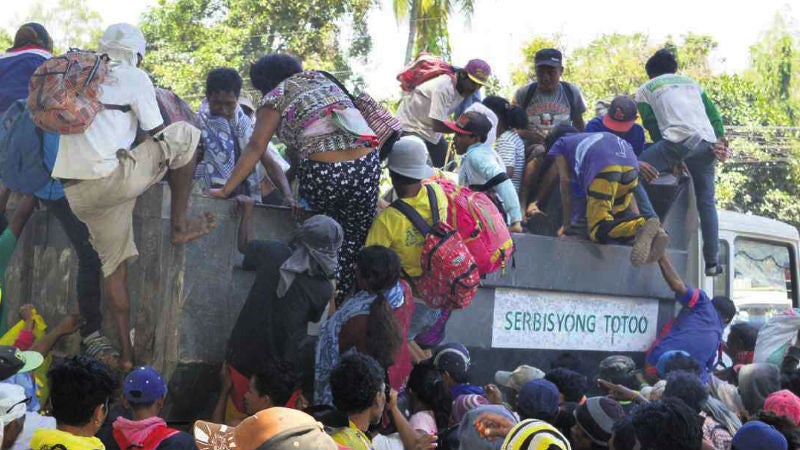 GOING HOME Some 200 farmers among those dispersed during a rally of drought-affected peasants in Kidapawan City to demand government aid, climb onto a truck that will take them home on Sunday. WILLIAMOR A. MAGBANUA / INQUIRER MINDANAO

Lawyers are preparing a raft of criminal, civil and administrative charges against the governor of North Cotabato province and the provincial police commander over the violent dispersal of a peasants’ protest in Kidapawan City that led to the deaths of three farmers and the wounding of scores of others on Friday.

In a text message to the Inquirer yesterday, NUPL secretary general Edre Olalia said the Volunteers Against Crime and Corruption (VACC) had also expressed willingness to join the legal action as cocomplainant.

Six thousand farmers from different parts of North Cotabato whose farms were ravaged by drought caused by El Niño had been protesting in front of the National Food Authority (NFA) in Kidapawan for three days, demanding food aid from the provincial government, when riot police tried to disperse them with water cannon on Friday morning.

The farmers stood their ground and a scuffle between them and riot police who charged their barricade ensued, protest leader Norma Capuyan said after the melee.

Rocks were hurled and gunshots fired as the two sides clashed, Capuyan said.

She said panicked protesters picked their bloodied companions from the highway across from the NFA building and treated their wounds by the roadside as they were sprayed with water from fire trucks.

“Everyone was angry. The police were hitting us. It was a real commotion,” she said, adding that the protesters left the highway and retreated to a nearby Methodist church.

Capuyan claimed 116 protesters were wounded while 89 others were missing. She reported that two male farmers in their 40s were killed in the shooting, but later reports raised the death toll to three after another shooting victim died.

The Philippine National Police said 40 of its men were also hurt in the ruckus, two of them in critical condition.

Governor Mendoza told a news conference after the melee that she was taking “full responsibility” for the incident and that the farmers had no permit for a prolonged rally.

Lawmakers, including candidates in national elections on May 9, condemned the violent dispersal of the protesting farmers and Malacañang promised an investigation.

The Commission on Human Rights also condemned the police use of guns and said it would send a fact-finding team to Kidapawan to investigate.

The NUPL planned legal action immediately after the clash on Friday.

“In stubbornly justifying the premeditated attack on unarmed, starving, protesting farmers as a ‘clearing operation’ purportedly due to a lack of a permit to peaceably assemble, which she is empowered to issue in the first place, Governor Mendoza exhibited unparalleled remorselessness, arrogance and self-righteousness. By saying that the issue ‘is not about rice,’ she betrayed herself as [a snobbish aristocrat],” Olalia said.

The NUPL has also asked the national leadership of the Integrated Bar of the Philippines (IBP) to issue a resolution for an investigation of the violent dispersal of the farmers’ protest, Olalia said.

Manila-based social justice lawyer Vladimir Cabigao warned of a further “breakdown of governance” if the plight of suffering farmers were not remedied.

San Beda College Alabang law professor Bruce Rivera blamed the government for not spending for preparations for the drought brought by El Niño.

“This was the reason why the farmers starved, and hunger makes one angry. Our leaders should understand that a person who has hunger pangs turns into an animal. This is not understood by a leader who is an oligarch or by the aristocratic ones who want to become leaders. In a leadership where those who prevail are the few who control the country’s wealth, hunger alleviation has been forgotten,” he said.

Malacañang countered that the government had long been dealing with the effects of El Niño.

He said President Aquino formed a Cabinet task force to ensure food security, enough water to drink and for irrigation, and prepare communities for calamities drought might cause.

“If we did not get any report of any crisis or calamity that happened in different areas, probably it’s because of [the] government’s immediate response to [El Niño],” Coloma said.

He said the latest report submitted to the President on March 18 by the task force coordinator, the National Economic and Development Authority, listed measures implemented, including extensive cloud seeding, distribution of drought-resistant crop seeds to farmers for planting, and development of small water-impounding projects for irrigation.

Coloma said cash-for-work programs were also launched by the Department of Social Welfare and Development and among the beneficiaries were farmers in North Cotabato.

“That’s why it would be too simplistic to just say that what the farmers were asking for was not granted. That’s a lie, because the program implemented and still being implemented by the government [is] comprehensive,” he said.

Rice donations have started to pour in for the victims of last Friday’s dispersal, with movie actor Robin Padilla giving them 200 sacks of rice on Saturday.

Also on Saturday, donors from Davao City sent in 65 sacks of rice for the farmers sheltering at the Methodist church in Kidapawan.

At least 300 of the farmers returned to their homes yesterday, but 300 others from Makilala town arrived at the church for a share of the donated rice.

Police, however, refused to let the farmers in.

He said the farmers came to get a share of the donated rice because they failed to get assistance from the local government in their town.

But Supt. Jerson Birrey, commander of the police public safety battalion in Kidapawan, said he was just following his immediate superior’s orders.

Governor Mendoza said 15,000 sacks of rice demanded by the protesters would be released soon through the local governments.

She said farmers who wanted to continue the protest could do so as long as they did not block the highway. With reports from Williamor Magbanua and Karlos Manlupig, Inquirer Mindanao; and AFP

Police blocks 300 farmers from getting rice in Kidapawan

Read Next
Naia outage causes chaos
EDITORS' PICK
97% of COVID-19 beds at PGH currently occupied
Gear up and get ready to play with Yamaha Mio Gear
Acer starts the year off strong with the Aspire Vero National Geographic Edition
Japan brings back virus restrictions over Omicron surge
Over 3 Million worth of prizes to be won at Smart Padala’s SENDali Manalo Promo!
Uproar over no vax, no ride policy: Maybe it’s time for gov’t to say sorry—Bello
MOST READ
1Sambayan names 7 aspirants in its 2022 Senate lineup
Emma Stone calls Andrew Garfield a ‘jerk’ after he ‘lied’ about his ‘Spider-Man: No Way Home’ appearance
Guevarra to Acosta: Obey rules on unvaccinated
PH to import 60,000 tons of fish to cover shortage
Don't miss out on the latest news and information.