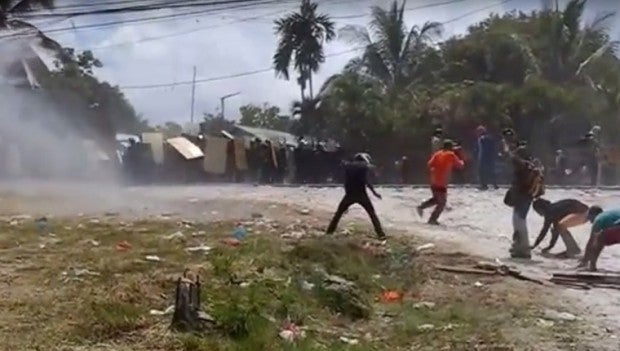 Protesters pick up stones during the bloody clash with policemen in Kidapawan City on April 1. INQUIRER PHOTO

Farmers’ group Kilusang Magbubukid ng Pilipinas (KMP) said Aquino’s silence on the violent dispersal of the farmers was reflective of his “habitual practice” as a “landlord president” of dismissing farmers’ demands.

“Aquino’s continuing silence and the lines mouthed by his numerous mouthpieces betray the President’s official position both on the issue of drought and the Kidapawan massacre.”

“Aquino’s deafening silence shows that he is used to violent dispersals and massacres as a habitual practice of the landlord president in dismissing farmers’ just, legitimate, and moral demands,” KMP chair Rafael Mariano said in a statement.

“Aquino and his bunch of spokespersons are now justifying and covering up the Kidapawan massacre through their blame-the-victim template and by spreading blatant lies that the protest is illegal and the protesters are infiltrated by outsiders and communists,” he said.

Quezon, in a press briefing on Saturday, blamed the militant left for supposedly infiltrating the farmers’ protest.

“It’s very clear that the background to this whole, sad, and tragic incident is that the farmers mobilize among those who participated in mobilization are many cause-oriented groups, you know from the militant-left,” Communications undersecretary Manolo Quezon said.

For its part, Bagong Alyansang Makabayan said Aquino was “too busy” campaigning for his bets to the point that he was mum on the violent dispersal in Kidapawan City.

“The whole nation is aghast at what happened to the protesting farmers. Condemnation of the violence has come across party lines. In this time of crisis, where is the president? Nasaan ang pangulo? Is he still too busy campaigning to even give a hoot about the plight of the farmers? He has not spoken since the shooting took place,” Bayan secretary general Renato M. Reyes, Jr. said in a separate statement.

Reyes also laid out five urgent things that Aquino should do at the aftermath of the bloody clash: