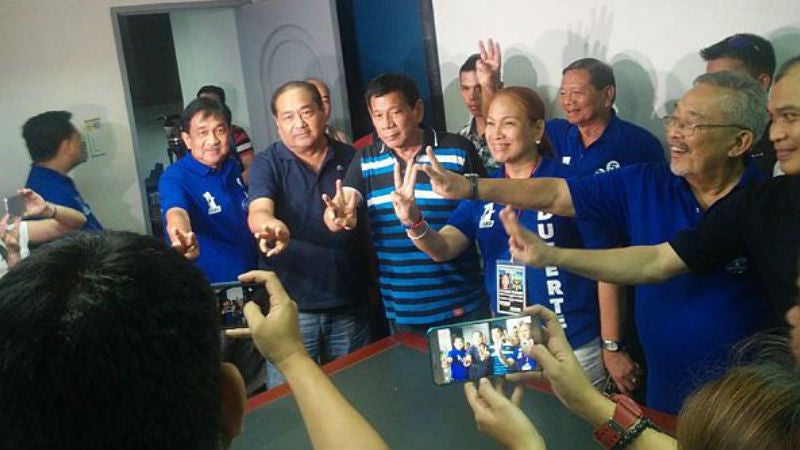 CEBU CITY, Philippines—The Garcia-led One Cebu party has vowed to deliver 1 million votes to Davao City Mayor Rodrigo Duterte in his bid for the presidency in the May 9 elections after the influential political family dumped Vice President Jejomar Binay.

“Cebuanos would do for Duterte what it did in 2004,” said Winston Garcia, the party’s gubernatorial candidate in Cebu province, in a statement Sunday.

Garcia referred to the 1-million vote margin the Cebuanos gave Gloria Macapagal-Arroyo that won her the 2004 presidential election against the late movie star Fernando Poe Jr.

Cebu province has a voting population of 2.7 million—the largest in the country.

In a news conference in Davao City, Duterte announced that he had received the endorsement of One Cebu and that this meant support for his running mate, independent Sen. Alan Peter Cayetano.

Pete Laviña, Duterte’s spokesperson, said that with One Cebu’s support, the Davao mayor would likely win not only in the province but also in the rest of the Cebuano-speaking areas in the Visayas and Mindanao, where Cebu’s influence extends.

“This confirms speculations that many LGUs (local government units) will switch sides as Duterte gains more support throughout the country and takes the lead in the presidential race,” he said in a statement.

Laviña did not say whether Duterte would support the gubernatorial bid of Garcia, Arroyo’s general manager at the Government Service Insurance System.

“We are happy with the endorsement,” said Mayor Leoncio Evasco Jr. of Maribojoc, Bohol province, Duterte’s campaign manager, but he added that there was no formal agreement yet to support Garcia.

During the meeting between Garcia and Duterte at Sugbutel on Saturday night, the Davao mayor did not raise the hand of the One Cebu leader when they appeared before photographers. He said they were working on an alliance but that there was nothing final yet.

In his statement on Sunday, Garcia said it “became a logical and clear stand for One Cebu to support one of its own, and a Bisaya for President.”

Garcia said One Cebu’s platform, ideals and vision were in perfect sync with the platform of Duterte and his running mate, Cayetano, especially on infrastructure.

“My rivals should get scared,” Duterte was quoted as saying in the statement after he was informed of One Cebu’s decision to back him.

Duterte has been gaining support among the Cebuanos who identify him as one of their own because he has roots in Danao City in Cebu.

Among those who threw their support behind him was former Gov. Lito Osmeña, who, like the Davao mayor, is an advocate of federalism.

His brother, Mayor John Henry Osmeña, reiterated his commitment to Binay, but said he would not stop his councilors should they go for Duterte. He said he would include Binay’s name in his sample ballots as his choice for President, and Rep. Leni Robredo for Vice President.

One Cebu earlier broke its alliance with Binay’s United Nationalist Alliance (UNA) after the local party felt that it had been getting an “Imperial Manila” treatment—“with absolute contempt and disrespect.”

Garcia said UNA repaid One Cebu’s loyalty by “cavorting” with the opposition and holding rallies in the province without giving notice to One Cebu, causing confusion among its candidates and supporters.

“We respect One Cebu’s decision. We just have to work harder in bringing our message direct to the people,” said Navotas Rep. Toby Tiangco, UNA president.

Tiangco said UNA would continue to tell people that Binay had done a lot for the poor, including giving free medicines, healthcare and education to them.

“Other candidates talk about what they will do for the poor, but only Binay has already made life better for the poor,” Tiangco said in a text message.

With One Cebu’s support, Duterte is assured of votes from three out of seven districts in the province. One Cebu’s bailiwick covers the second district, third district and fourth district.

In the fifth district, the local party Bakud led by the Duranos has endorsed Sen. Grace Poe.

The rest of the districts—first, sixth and seventh—as well as the lone congressional district of Lapu-Lapu have committed to the Liberal Party’s Mar Roxas. But Mayor Adelino Sitoy of Cordova town, which belongs to the sixth district, is supporting Duterte. With reports from Victor Silva, Inquirer Visayas; Nancy Carvajal in Davao City, and Niña Calleja and Christine O. Avendaño in Manila