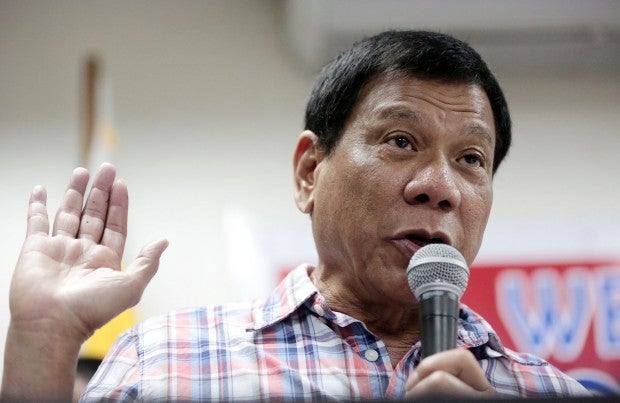 The political clan of the Zubiris in Bukidnon has endorsed the presidential bid of Davao City Mayor Rodrigo Duterte.

Governor Jose Ma. Zubiri made the endorsement on Friday, April 1, during the province’s Kaamulan Festival.

“This is the mandate of the people of Bukidnon,” Zubiri said.

The Zubiri patriarch said “the decision to support Duterte was reached after a series of consultations with local officials and their constituents.”

Two weeks before his endorsement, Zubiri called a conference attended by 5, 200 local officials. He said 68 percent of the local leaders support Duterte’s candidacy.

“We are supporting him despite the fact that he doesn’t have the machinery or funds–unlike the other candidates. Sariling sikap itong amin (We are helping ourselves here),” Zubiri said.

The governor said they understand that Duterte’s lack of funds was due to his “principled rejection of help from known political funders.”
READ: Duterte: I am not accepting money from people with vested interests

“He doesn’t want to ask favors from billionaires in Manila and we get that, we understand that,” he said.

During a speech at a campaign rally in Bukidnon, Duterte thanked Zubiri and his constituents for their support.

The tough-talking mayor presented his peace agenda for the Philippines.

“If I win, I will talk to the rebel groups–the Moro Islamic Liberation Front, the Moro National Liberation Front, and the New People’s Army,” he said. “I heard that my professor, Jose Maria Sison of the National Democratic Front of the Philippines, wants to go home if I get elected.”

Bukidnon is the fourth most vote-rich province in Mindanao with over 760,000 registered voters. CDG

Read Next
Fire hits University of the East-Manila
EDITORS' PICK
Acer starts the year off strong with the Aspire Vero National Geographic Edition
Over 3 Million worth of prizes to be won at Smart Padala’s SENDali Manalo Promo!
COVID-19 cases in City of Manila are decreasing, says OCTA
DOH: Too early to say COVID-19 cases are declining
The best of bayside and city living at SMDC’s Sail Residences
Gov’t rolls out COVID-19 vaccination in select pharmacies on Jan. 20 to 21
MOST READ
Comelec junks petition to scrap Bongbong Marcos COC
In Batanes, octogenarian dies of COVID-19
Marcos Jr. visits Cebu, stands as ‘ninong’ to mayor’s son
When to get boosters after positive COVID test
Don't miss out on the latest news and information.