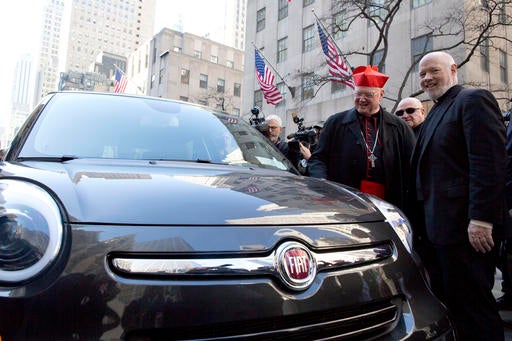 Cardinal Timothy Dolan, left, and Catholic Charities Msgr. Kevin Sullivan inspect the Fiat 500 sedan used during the visit of Pope Francis to New York as it makes a stop in front of St. Patrick’s Cathedral during the St. Patrick’s Day parade. AP Photo

The black Fiat 500 Lounge was one of two such mini Popemobiles that ferried the pontiff around the Big Apple.

READ: Who needs a limo? Pope Francis opts for a more modest Fiat

At more than 12 times its base price, it was snapped up by millionaire businessman Miles Nadal, who already owns more than 130 cars and motorbikes, according to the Charitybuzz auction website.

Proceeds will go to Catholic schools and charities in the New York diocese, as well as two international agencies: Catholic Relief Services and the Catholic Near East Welfare Association.

“In a couple of occasions, (Pope Francis) was in the Popemobile. For the rest of his time, when he was not in the Popemobile, this is how he traveled around in the motorcade,” New York Archdiocese spokesman Joseph Zwilling told Agence France-Presse earlier this week.

The second Fiat will also be used to raise money for charitable causes, although plans have not been set, he said.

Charitybuzz had valued the practically new vehicle, featuring a fixed glass roof and premium seats, at $82,000.

That’s how much a Fiat used by the Pope in Philadelphia — another stop on his September 22-27 US trip — was sold for at a gala in late January.