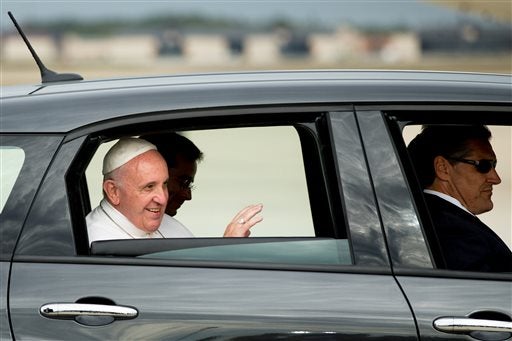 In this Sept. 22, 2015, file photo, Pope Francis waves from a Fiat 500L as his motorcade departs Andrews Air Force Base, Md. ,after being greeted by President Barack Obama and first lady Michelle Obama. One of the two Fiats used by Pope Francis during this visit to Philadelphia last year is going up for auction. The car will be up for bid as part of the Philadelphia Auto Show black tie gala on Jan. 29. Bids will be accepted in person and online. AP FILE PHOTO

PHILADELPHIA— The popemobile is staying in Philadelphia.

The black Fiat 500L, one of two used by Pope Francis during his trip to the city in September for the World Meeting of Families, sold at auction on Friday night.

Michael and Kate Chapman, owners of Chapman Auto Group, secured the winning bid of $82,000 at a black-tie event kicking off the weekend’s Philadelphia Auto Show.

The auction started at 9 p.m. and lasted for only 11 minutes. Kenneth Gavin, spokesman for the Archdiocese of Philadelphia, said more than 19 bidders from around the country participated.

“We are so heartened by the fact that this extraordinary gift will go on to enrich the lives of so many individuals,” said Donna Crilley Farrell, executive director of the World Meeting of Families.

Chapman will put the car on display at his dealership in Horsham, he told Philly.com.

The second Fiat that Francis used in Philadelphia will remain on display at the auto show running until Feb. 7.

BACKSTORY: Who needs a limo? Pope Francis opts for a more modest Fiat

The Archdiocese said all auction proceeds will benefit charities and the archdiocese’s special education schools.