Outside experts say at least 17 burned at Mexican dump 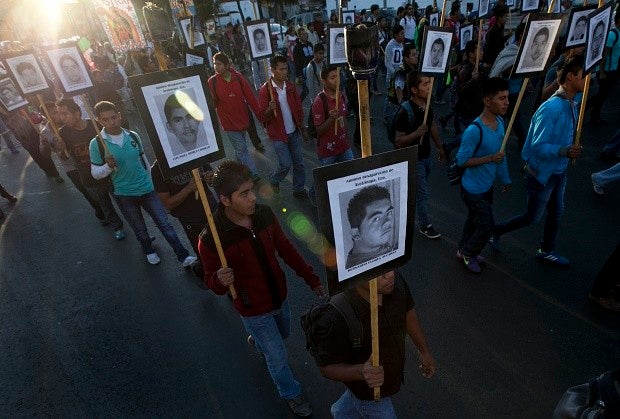 In this Dec. 26, 2015, file photo, relatives of the 43 missing students from the Isidro Burgos rural teachers college march holding pictures of their missing loved ones during a protest in Mexico City. A third investigation of a dump site in southern Mexico found evidence indicating there was a large fire there in which at least 17 people were burned, a member of a six-person fire expert team said Friday, April 1, 2016. AP FILE PHOTO

MEXICO CITY — Experts have found evidence of a large fire in which at least 17 bodies were burned at a dump in southern Mexico, a member of the investigating team said Friday, in the latest twist in the case of 43 missing teachers’ college students.

Ricardo Damian Torres, speaking from the offices of Mexico’s attorney general, said tests would be conducted in the coming weeks to determine whether it would have been possible to burn all 43 at the dump in the town of Cocula in Guerrero state, where the government has said the students’ bodies ended up after disappearing in nearby Iguala on Sept. 26, 2014.

Relatives of the missing students have fiercely disputed the government’s version of events and multiple investigations by other teams of experts have concluded they could not have all been burned at the Cocula dump. The government’s perceived mishandling of the symbolic human rights case has dogged the administration of President Enrique Pena Nieto.

In Friday’s brief press conference, Torres did not say when such a fire occurred or offer any explanation as to how the team conducted its research and reached its conclusion.

“There is sufficient evidence, including physically observable, to affirm that there was a controlled fire event of great dimensions in the place called the Cocula dump,” he said, speaking for the six-member fire-expert team and sitting beside Mexico’s deputy attorney general for human rights, Eber Betanzos. He took no questions.

In an interview with Milenio TV, Vidulfo Rosales, a lawyer representing the families, said they had not reviewed the experts’ report and could not discuss it. However, he expressed concern about the way the attorney general’s office was handling the investigation.

It was the latest in a series of investigations into what happened to the students from the Rural Normal School at Ayotzinapa. They disappeared after hijacking buses in Iguala. Evidence indicates they were intercepted by local police and turned over to members of a local drug cartel.

Four months after they disappeared, Mexico’s then-attorney general Jesus Murillo Karam laid out the results of the government’s investigation with such certainty that he called it the “historic truth.” Citing confessions and forensic evidence, he said all 43 students were dead and had been incinerated at a garbage dump outside Cocula.

Murrillo Karam said their incinerated remains were then thrown into a nearby river. Genetic testing of remains the government said it recovered from the river eventually confirmed the identities of two of the missing students. In terms of motive, he said the Guerreros Unidos drug cartel, which controlled the area, had believed some of the students were from a rival gang.

The following month, the Argentine Forensic Anthropology team — brought in at the families’ request — said evidence did not support the government’s version that the students were burned at the site.

And in September 2015, a team of independent experts sent by the Inter-American Commission on Human Rights, or IACHR, released a report that dismantled the government’s investigation, but said they had no evidence as to the students’ whereabouts. The report explained how state and federal police, as well as the military, were monitoring the students’ movements before they were attacked. But no one intervened when Iguala and Cocula police attacked, killing six people.

The team that announced its findings on Friday was agreed to by the IACHR and the Mexican government.

But late Friday, the IACHR’s team of independent experts released a statement saying that by holding the news conference the attorney general’s office had broken their agreement to seek consensus on how this latest investigation would be handled.

The statement said Torres had alluded to information included in the provisional report that had not been analyzed by the IACHR experts and was not even a consensus among the fire experts.

They wrote that they now considered the working agreement about the dump to be “broken.”