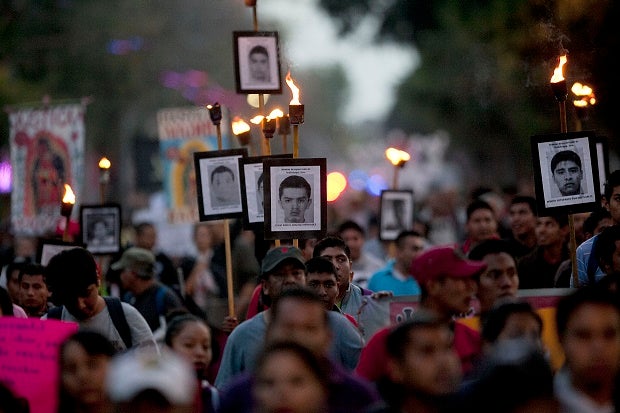 In this Dec. 26, 2015, file photo, relatives of the 43 missing students from the Isidro Burgos rural teachers college march holding pictures of their missing loved ones during a protest in Mexico City. AP FILE PHOTO

MEXICO CITY, Mexico—Mexican authorities have arrested three more suspects in connection with the disappearance and presumed slaughter of 43 students in 2014.

National Security Commissioner Renato Sales said Friday that three suspected members of a criminal group were detained in Iguala, the city in the southern state of Guerrero where the 43 students vanished on September 26, 2014.

Two of the suspects, aged 19 and 28, “received the young men from Iguala municipal police officers” that night, Sales said, without specifying what happened next.

Prosecutors say that Iguala police abducted the students after they seized buses for a protest and handed them over to the Guerreros Unidos gang, which killed them and incinerated their bodies at a landfill.

The third suspect, a 40-year-old man, is the “main” person involved in the murder of Julio Cesar Mondragon, a student whose body was found in Iguala with his facial skin peeled off, Sales said.

Relatives of the students and independent investigators have rejected the official conclusions in the case. The attorney general’s office agreed to create a special unit for the case and is looking at new lines of investigation.

Four men in their 20s and a 16-year-old girl were last seen on January 11 outside a supermarket in Tierra Blanca.

Footage from a surveillance camera, which was broadcast on the website of Radio Formula, showed that they were followed by a state police vehicle before they disappeared.

More than 26,000 people are reported missing in Mexico.