Evaluation of UP buildings, policies sought after Faculty Center fire

The chancellor of the University of the Philippines in Diliman has called for an evaluation of buildings and reassessment of policies in the Quezon City campus following the fire that razed its faculty center on the wee hours of Friday.

“Although the Bureau of Fire Protection recently concluded an inspection of all our buildings, everyone is enjoined to conduct another evaluation and procure whatever is needed for fire prevention and/or immediate responses to fire,” Dr. Michael Tan said in a statement.

The fire that started at around 1 a.m. destroyed the three-story Bulwagang Rizal, which houses the department offices of the College of Arts and Letters (CAL), faculty rooms of the College of Social Sciences and Philosophy (CSSP), and the UP Creative Writing Center. It was declared under control at 4:40 a.m. and fire out only at 11:25 a.m. or about ten hours since it started.

Tan, who was on site at about 1:45 a.m., said security guards on duty reported a small flame coming out of a room on the third floor, which immediately spread to the second floor and a portion of the first floor.

It was the third fire that hit a UP Diliman building in a span of less than a year. In 2015, a fired also razed the College of Arts and Sciences Alumni Association (Casaa) food center in June and another fire hit the UP Alumni Center in July.

Tan called on all Diliman units to conduct a series of meetings as soon as possible to reassess building policies, namely access to rooms at night; strict enforcement of all lights out, all appliances unplugged at night; and provision of duplicate keys for all rooms.

“Given such a long and high intensity fire, the structural integrity of the building now needs to be evaluated so we do not take any chances,” he said.

As of writing, fire investigators are still probing the cause of the blaze, but the Bureau of Fire Protection earlier explored the possibility of electrical causes and ruled out speculations of arson.

A postgraduate thesis on rapid fire risk assessment by engineer Harold Aquino, the main findings of which he had posted on Facebook, showed that the Faculty Center was the most vulnerable to fire among UP buildings.

Aquino said the building has a high risk rating due to “its high fireload density (amount of combustible materials), for both the contents and the structure itself.”

“Couple this with very old electrical installations and other hazards and it sure spells disaster. The Main Library has about the same fire risk level as the Faculty Center. I hope we can look into that as well,” Aquino wrote.

“As we, researchers in the field of disaster risk management, would always say: Disasters are preventable. We just need to take a proactive stance to mitigate it,” he added.

BFP’s Crisfo Diaz on Friday told reporters that the building’s light materials, including its paper contents, old age, and electrical factors may have caused the blaze to spread faster.

Tan also announced that the entire building will be off limits starting today, Friday, to allow an investigation by the BFP, and classes in the CAL building are also suspended today.

“Faculty members who were adversely affected by the fire, i.e. loss of teaching materials, psychological adjustment problems–people have been talking about ‘grieving’–have the option of not holding their classes, even if not in the CAL building,” he said, adding that the deans of affected colleges are working out arrangements for temporary faculty offices.

While no injuries or casualties were reported, the chancellor said the damage that the fire caused to the UP community was “incalculable.”

“The other losses are incalculable, considering all the books, research notes, archival materials that went up in flames. There was much grieving from faculty, staff, and students who rushed to the site,” he said. IDL 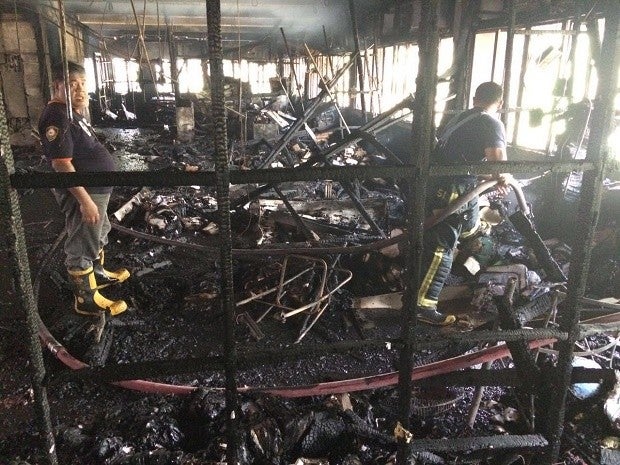 Firemen inspect the ruins of the Arts and Letters Building in UP Diliman, Quezon City after a fire razed the structure on Friday morning. INQUIRER / NIÑO JESUS ORBETA