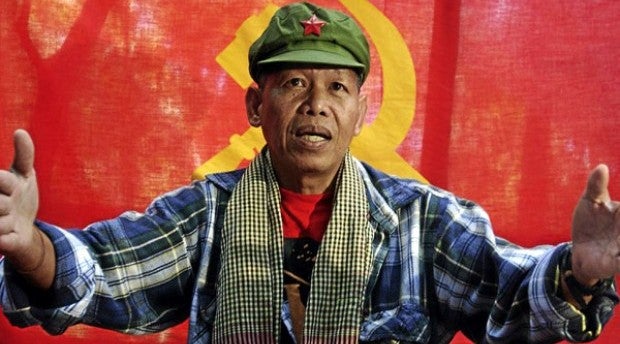 Activists, most of them wearing green and red camisa de chino and Mao caps and their faces covered with red paint, gave Rosal a final tribute at the gymnasium of the St. Joseph Academy here on Thursday afternoon.

The metal urn containing Rosal’s ashes was paraded in the town on a “parago,” a carabao-drawn carriage, to symbolize his roots as a child of a peasant family, said Diego Torres of the Bagong Alyansang Makabayan (Bayan).

Rosal was 64 when he died of heart attack somewhere in northern Luzon in 2011.

Earlier this week, activists also paid tribute to Rosal at the University of the Philippines (UP) campuses in Diliman, Quezon City, and Los Baños town in Laguna province, coinciding with the 47th anniversary of the NPA.

Ibaan Mayor Danny Toreja acknowledged Rosal for all the help he had extended to the town and his townmates.

“Kapag nagkakaroon ng problema, nasasambit po nila ang ating ginugunita, si Ka Roger, naroon po ang tulong (If we encounter any problem, Ka Roger was there to help us),” said Toreja, although he did not specify what kind of help Rosal had given them.

Rosal’s friend, Mateo Guera, said Rosal may have had a different view on things but he was able to keep the town peaceful for over a decade.

However, in a video clip, Andrea thanked those who supported her parents.

“Sapul pagkabata, ipinaunawa nyo sa amin ang inyong ipinaglalaban. Ipinagmamalaki ko kayo (Since we were children, you made us understand what you were fighting for. I am proud of you),” Andrea said.

Rosal’s ashes were buried along with his wife’s, Rosario Dumanais, at the cemetery where their grandchild Diona Andrea, was buried in 2014.

Andrea, who was arrested in 2014, gave birth while in detention. Her child, however, died two days later.

Dumanis, or “Ka Soly,” died in an encounter with government troops in Quezon province in 2011.

Rosal’s sister Fely Inandan, 66, said they have been wishing that the remains of Rosal and his wife be brought home to Ibaan.

“Sabi ko, pagdating ng panahon, gagawan ng paraan na magkasama at maiuwi. At ito na nga po, dumating na ang panahong iyon (I told myself that someday, we will find a way that they will be reunited and brought to their hometown. And this is it, that time has come),” she said. RAM