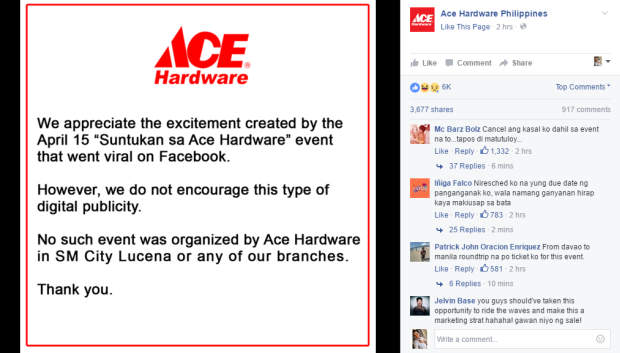 Ace Hardware Philippines has denied involvement in a viral fistfight event on Facebook dubbed as “Suntukan sa Ace Hardware” that made waves on social media.

“We appreciate the excitement created by the April 15 ‘Suntukan sa Ace Hardware’ event that went viral on Facebook.

However, we do not encourage this type of digital publicity,” Ace Hardware said in a statement.

“No such event was organized by Ace Hardware in SM City Lucena or any of our branches,” it added.

The viral event was scheduled to be held on April 15, 3 p.m., at SM City Lucena.

Netizens were quick to express their “disappointment” over Ace Hardware’s advisory, saying that they cancelled prior commitments to attend the event.