Thousands of activists fill the UP theater for a final tribute for Ka Roger Rosal. Photos from Kristine Sabillo Twitter account 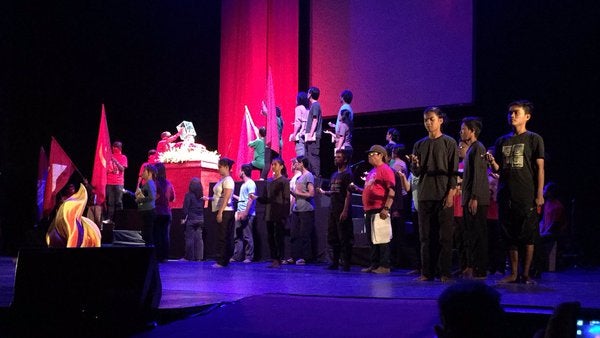 Thousands of activists on Tuesday paid their respects to Gregorio “Ka Roger” Rosal, whose ashes were finally brought to Manila five years after he died of a heart attack in the hinterlands of northern Luzon.

University of the Philippines (UP) Theater was filled with people hoping to watch performances and hear stories about the life of the iconic New People’s Army (NPA) commander. The tribute coincides with the 47th anniversary of the NPA.

Rosal, who was the spokesperson of the Communist Party of the Philippines (CPP), is considered one of the most recognizable faces of the communist movement, second only to CPP founder Joma Sison.

One of the organizers said that while they already held a tribute in 2011, it was the first time that the public would be able to see his remains, which are now kept in a small metal urn.

He said security and other concerns made it difficult for Rosal’s remains to be brought to Manila immediately after his death.

Rosal’s urn will be brought to his hometown in Ibaan, Batangas, on Thursday after a series of tributes and public viewings in southern Luzon. His remains will be interred in Ibaan.

The CPP, in a statement, said Rosal deserved to have a grave with his name on it. It described Rosal as a propagandist who fought for the interests of workers and farmers.

The National Democratic Front of the Philippines (NDFP), the political arm of the CPP, said Rosal became popular because he served as “the voice, the face and spirit of the revolutionary movement” since the Marcos dictatorship.

“He was an excellent communicator,” the NDFP negotiating panel said in a statement. “He was a favorite of media people. They loved to call him up and interview him.”

Rosal was most known for his interviews and good relations with media. Some of the personalities who gave their testimonies about Rosal were broadcasters.

Ed Lingao of TV5 said they knew “Ka Roger” as someone with a “sense of humor and sense of humanity” while Deo Macalma of dzRH shared his unforgettable experiences with the late NPA commander.

The tribute featured musical performances, old footages of Rosal and interviews with his parents and comrades.

The CPP has been waging the longest running insurgency in Asia. Its peace negotiations with the Philippine government remain stalled. RC