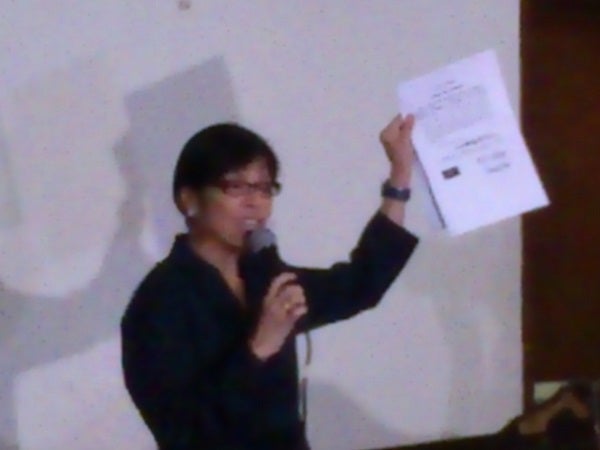 Reyes was earlier disqualified by the Commission on Elections (Comelec) in the 2013 congressional election on the grounds that she was a naturalized American citizen.

Reyes compared the high court’s ruling on Poe’s case and that of the disqualification case against her.

She said the high court allowed Poe to run for president even if her parents are unknown while declaring her as ineligible for a congressional seat when she is “a natural-born citizen, with a birth certificate, whose parents are Filipino citizens and are known public servants.”

Reyes asked why the high court allowed a foundling who reacquired Philippine citizenship, like Poe did, to seek presidency after earlier disqualifying a natural-born candidate in lower elective posts with previous dual citizenship and known parents, like Reyes does.

“If Poe-Llamanzares is allowed to run, should not, with more reason, that Gina O. Reyes be allowed to run?” Reyes said in a statement.

Associate Justice Mariano del Castillo has warned in his dissenting opinion that the controversial SC ruling on Poe’s case would open the floodgates of election protests as it reversed the jurisprudence set in earlier poll cases.

Barely two weeks after the March 8 Poe ruling, Reyes is the first poll protester to come forward and invoke the controversial ruling to insist on her own eligibility as congresswoman of her province’s lone district.

Reyes said the two fresh election protests filed against her by Lord Allan Jay Velasco before the Commission on Elections should be dismissed because the high court has just ruled in the Poe case that the poll body has no jurisdiction to decide on the qualifications of a president, vice president, senators, and congressmen.

The unseated congresswoman said these affidavits of renunciation restored her status as a natural-born Filipino citizen. JE