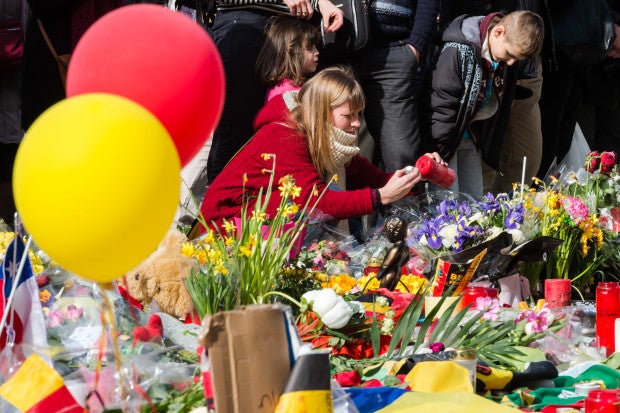 A woman lights a candle at floral tributes at a memorial site at the Place de la Bourse in Brussels, Saturday, March 26, 2016. Brussels airport officials say flights won’t resume before Tuesday as they assess the damage caused by twin explosions in the terminal earlier this week. (AP Photo/Geert Vanden Wijngaert)

BRUSSELS — The death toll from the March 22 attacks on Brussels airport and the metro system has been revised down to 28, the Belgian Crisis Center said on Sunday.

Spokesman Benoit Ramacker told AFP that the previous toll of 31 included the three suicide bombers — two who blew themselves up at the airport and one on board a train stopped at Maalbeek station.

“The provisional toll is 28 people killed in the attacks,” he said.

Only 24 of the victims have been identified to date, 14 of whom were killed at the airport and 10 at the train station.

A total 340 people from 19 countries were injured, of whom 101 remain in hospital. Sixty-two of them are in intensive care, half of them with severe burns.

“The toll, unfortunately, is still provisional due to the many people still in intensive care,” the spokesman said.