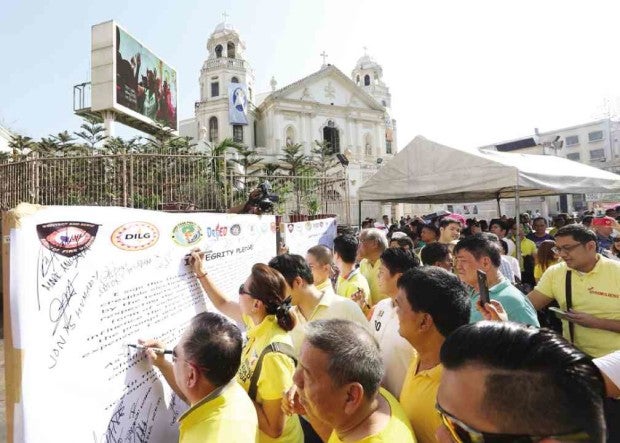 MANILA candidates vying for different posts sign the covenant for the conduct of orderly and peaceful elections spearheaded by the Commission on Elections. MARIANNE BERMUDEZ

THE COMMISSION on Elections (Comelec) expressed disappointment on Monday when nearly half of the 190 candidates running for various posts in the City of Manila failed to participate in the signing of a peace covenant for the May 9 elections.

Even the incumbent, Mayor Joseph Estrada who is running for reelection, and one of his toughest rivals for the post, Rep. Amado Bagatsing, were no-shows.

Estrada, however, had sent a representative, his spokesperson told the Inquirer. Bagatsing, on the other hand, claimed he was not invited to the event.

Despite the low turnout, Comelec-National Capital Region Director Temie Lambino stressed that they expected all of the candidates in the city to abide by election regulations.

At the signing of the covenant held at Plaza Miranda in Quiapo, another of Estrada’s political rivals, former Manila Mayor Alfredo Lim, took a swipe at the absentees.

“We are here because we believe in a free and peaceful election. Those who are not here may [not] believe in it because if they did, they should have been present. Everyone was invited anyway,” said Lim who is eyeing a political comeback.

The campaign period for candidates seeking local posts will start on March 25, Good Friday. The schedule, however, has been reset to the following day, March 26, to give way to the observance of Holy Week.

“In a way, we are disappointed [by the low turnout]. We don’t know what their reasons are for missing the event but all of the candidates were notified and were sent an invitation,” Lambino told reporters.

He observed that the number of attendees in Manila paled in comparison to those who showed up for the signing of peace covenants in Taguig, Malabon, Makati and Pateros. According to him, in these areas, almost all of the candidates were present.

“But even if they missed it, we hope that they will still be abiding with all the laws of the Comelec, our resolutions and the Fair Elections Act,” Lambino said.

Records show that there are 11 candidates in Manila running for mayor and five for vice mayor. A total of 25 candidates are vying for congressional seats while 149 others are running for councilor.

Reached by the Inquirer, Estrada and Bagatsing denied snubbing the signing of the peace covenant.

According to Estrada’s public information officer Diego Cagahastian, the mayor already had another commitment even before he received the Comelec’s invitation.

“That’s why he sent City Administrator Ericson Alcovendaz as his representative. It does not mean we are not for peace. We are. It’s just that he had a previous engagement,” Cagahastian said.

Bagatsing, on the other hand, claimed that the Comelec “never sent [me] an invitation,” saying that it would be embarrassing for him to attend when the poll body never asked him to be there.