Pro and con of death penalty: Poe, De Lima give their views 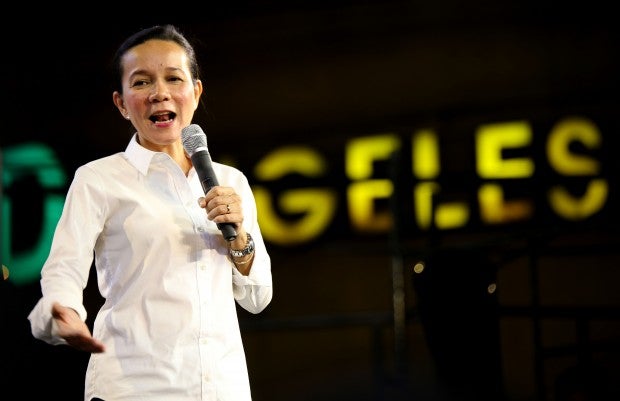 PRESIDENTIAL candidate Sen. Grace Poe said her interaction with the public during provincial sorties had prompted her to reassess her stand on the reimposition of the death penalty.

Poe said she was previously opposed to the return of death penalty which was abolished by President Gloria Macapagal-Arroyo in 2006.

She said she changed her mind after going around the country the last few months, during which the public pulse was overwhelmingly for the return of the death penalty but only for a select group of criminals.

“I believe that if we cannot stop the rise of criminality in the country and we have to impose strict rules, I am [for the reimposition of the death penalty] only for heinous crimes, drug pushers and repeat offenders,” Poe said in an interview after the debate.

The senator said she believed there were some people who could not be rehabilitated and must be made an example “no matter how much it would hurt inside” to instill fear in others.

Poe, however, said she would not rush the reimposition of the death penalty because she wants to fix the justice system to ensure the poor would not be abused by the rich and powerful.

She said she would make sure that the poor would have access to legal representation by increasing the budget of the Pubic Attorney’s Office to attract more brilliant lawyers to work for the state.

“It is up to Congress to do that because a president cannot just go out and reimpose it. If we cannot stop crimes, we have to have this in place,” she said.

But former Justice Secretary Leila de Lima, a Liberal Party senatorial candidate the reimposition of the death penalty, saying the state had the responsibility to offer reformation programs for all criminal offenders.

“No empirical evidence anywhere [in the world] has suggested that the death penalty deters crime,” De Lima said in a  statement.

“The death penalty should be abolished not only because there is no correlation between this punishment and crime deterrence, but also [because] its effects are basically irreversible,” she said.

De Lima, a former Commission on Human Rights chair, said criminals should be given a chance to “become reformed members of society.”

Putting individuals behind bars for life without parole is punishment enough for those involved in the illegal drug trade, human trafficking, sex-related offenses, serial killings and mass murders, she said.

Instead of implementing the death sentence, she said the government should institute measures for a “modern and simplified criminal code” to ensure higher conviction rates of cases brought against perpetrators of heinous crimes.

“We should also note that the CHR has said that most of those convicted belong to the lower classes, the poor and disadvantaged, financially unable to pay for their own counsel, relying only on the courts to provide them with legal counsel,” De Lima said.

She noted that a study conducted by the Free Legal Assistance Group showed that more than half of those who were on death row were poor.

“(W)e need to ensure the justice system indeed works by having a truly independent judiciary which can decide on cases with the highest integrity and ensure a speedy trial,” De Lima said.

She said the government should also hire “efficient prosecutors who can closely collaborate with investigating bodies and other law enforcement units for a strong case buildup, and a law enforcement sector that will implement the law to the letter.”