Binay ‘urges’ rivals to submit to AMLC probe, but …

MACTAN CITY, Philippines – Vice President Jejomar Binay on Monday urged fellow presidential candidates to subject all their bank accounts to investigation by the Anti-Money Laundering Council (AMLC) but stopped short of signing a waiver opening his accounts to a probe.

In a press conference at the Mactan Waterfront Hotel, Binay also furnished to the media copies of his Statement of Assets and Liabilities Networth (SALN), Statement of Election Contributions and Expenditures (SOCE), income tax returns, and a waiver he signed with the AMLC authorizing the council to subject him and his family to lifestyle check and a bank investigation.

Binay also showed a Jan. 27, 2016 medical certificate from Makati Medical Center finding him “physically and mentally fit for his candidacy as President of the Republic of the Philippines.”

He also showed to the media a copy of the Seal of Good Housekeeping to Makati city when he was mayor issued by the late Interior Sec. Jesse Robredo. 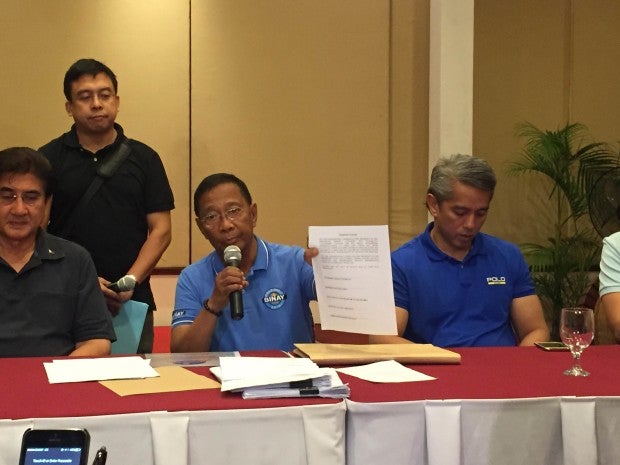 Vice Prsident Jejomar Binay presents a waiver as he urges his fellow candidates to subject their bank accounts to investigation by the Anti-Money Laundering Council. Marc Jayson Cayabyab/ INQUIRER.NET

Binay however begged off from signing the waiver immediately because he has yet to consult with his lawyer.

The waiver reads: “We, the undersigned candidates for President of the Philippines, hereby authorize the Anti-Money Laundering Council or its duly authorized representatives to open and check all bank accounts under my name, under my spouse’s name, my children’s name, and my children children’s name to ensure full transparency in this election process.”

“We, the undersigned candidates for President of the Philippines, also voluntarily submit ourselves to a lifestyle and government service performance in accordance with law,” the waiver read.

Binay made the dare after a report by the AMLC leaked finding alleged billions in deposits stashed in joint bank accounts between Binay and his alleged dummies.

According to a Philippine Daily Inquirer report quoting the bank findings, the AMLC said Binay had billions of funds in joint accounts with alleged dummies – which he purportedly earned from the allegedly overpriced Makati car park building, Makati Science High School building, and cakes for senior citizens – to finance his 2010 vice presidential bid.

The AMLC earlier said Binay had 242 joint accounts with his alleged dummies which kept P11 billion since 2008.

The AMLC report, the Inquirer reported, said the subject accounts, especially those of Binay, and joint accounts of Gerado Limlingan Jr., Sedillo Portollano and Eduviges Baloloy showed “multiple large transactions amounting to billions of pesos coinciding with the period of construction of the New Makati Parking Building 11 and Makati Science High School, and the Joint Venture agreement with Boy Scouts.”

“They used a complicated and sophisticated system of layering funds, including the opening of multiple bank accounts under the names of close and trusted associates and entities whose officers and directors are the very same persons, and high value and frequent transactions under the control and direction of the beneficial owner, VP Binay,” the AMLC in the Inquirer report said.

The Inquirer also quoted AMLC in saying that Binay’s seven bank accounts received checks drawn from the accounts of his alleged dummies Limlingan (Binay’s finance officer), Lily Crystal, Mitzi Sedillo and Bernadette Portollano (who are Limlingan’s employees) and Eduviges Baloloy (Binay’s longtime executive assistant and secretary) at the time of the construction of the Makati City parking building and Makati Science High School building from 2007 to 2014.

The Inquirer was able to obtain a copy of the 62-page AMLC report, which was the result of the Ombudsman investigations on alleged irregularities in the construction of the purportedly overpriced Makati City Hall Building II and Makati Science High School when Binay was mayor.

Binay’s spokesperson Atty. Rico Quicho earlier said the AMLC admitted before the Manila Regional Trial Court hearing the civil forfeiture case against Binay that the vice president only had one bank account – and not 242 as earlier reported to be Binay’s joint bank accounts with alleged dummies – which contained only P1.7 million and not billions of pesos.

Quicho also said the AMLC two weeks ago had asked the Manila RTC to drop JC Binay Foundation and Agrifortuna Inc. from the case, because it could not prove that these were the alleged links of Binay to his alleged dummy Gerardo Limlingan, Binay’s long-time finance officer who has gone missing since the allegations broke out.