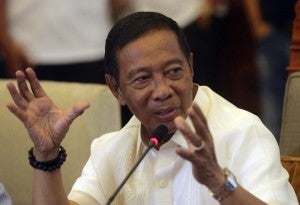 “The amount transacted through Vice President Jejomar Binay’s accounts originated from illicit and/or undeclared activities. Moreover because of the near equivalence of deposits and withdrawals his bank accounts were used as mere conduits of funds derived from such activities.”

This was the conclusion of the Anti-Money Laundering Council (AMLC) in its petition to the Court of Appeals to freeze 242 bank accounts and other assets of Binay, his family and alleged dummies. On Monday, the court granted the petition, effective for six months.

The report said that from 2009 to 2014 Binay’s large and frequent deposit transactions with several banks totaled at least P263 million, while subsequent large withdrawals reached P266,731,454.47.

The AMLC explained that withdrawals were made almost simultaneously with almost equal amounts of deposits which made it appear that the accounts were “mere conduits.”

“There is a wide gap between his legitimate income and his total bank accounts,” the AMLC said, indicating income from illegitimate sources.

The AMLC said the Vice President did not declare any business interests.

Binay also had joint accounts with his longtime financial adviser Gerry Limlingan, which it said also showed that it was also used as conduits for remittances abroad, particularly to two banks in Canada—The Bank of Nova Scotia and the Toronto Dominion Bank.

The report showed that listed as beneficiaries of the remittances were Synovate, Synovate LTD., DJR research and Lily Cristal Hernandez, said to be the Limlingans’ longtime assistant now based in Canada.

In a phone interview, Mercado said that Limlingan and Baloloy, who had not been seen in public since the Senate blue ribbon subcommittee started its investigation into the allegedly overpriced Makati City Hall Building II 10 months ago, accounted for the lion’s share of the 242 bank, stocks and trust accounts ordered frozen.

Mercado said that Limlingan, his relatives and staff controlled 110 of the 242 frozen accounts, excluding 12 more he owned with Baloloy.

Baloloy and her relatives controlled 44 of the 242 frozen accounts.

“I’m very happy with the AMLC report because it confirmed all of the things that I told the Senate. At least we now know who has been lying,” Mercado said.

Limlingan is the longtime financial adviser and campaign adviser of Binay. He is the president of JC Binay Foundation Inc., a board member of the University of Makati, a managing director of Omni Security Investigation (which cornered the security and janitorial contracts in Makati City Hall), original stockholder of Agri-Fortuna Inc. (which owned the alleged “Hacienda Binay”).

His brother, Victor S. Limlingan, is a codepositor in two of the accounts frozen by the CA. Victor is the managing director of DMCI Holdings Inc., director of Landco Pacific Corp., and owner and manager of Regina Development Corp., a stock brokerage firm.

Mercado also identified Limlingan’s children, Melissa Gay and Gerardo Martin, and his second wife, Marguerite E. Lichnock, among those whose accounts were put on hold by the CA.

Mercado said that one of Limlingan’s codepositor in the frozen accounts, Lily H. Crystal, was also his executive assistant before she migrated to Canada in 2006. Mercado said Crystal was replaced by Mitzi O. Sedillo who also owned some of the bank accounts ordered frozen by the CA.

He pointed out that Crystal’s migration to Canada should explain the AMLC’s finding that a significant amount of US dollars were transferred from the monitored accounts to Canada from 2008 to 2014.

Next to Limlingan, Mercado said the only person Binay trusted with his money was Baloloy who was a distant relative of the Vice President. The AMLC report showed that she had 44 accounts under her name and with her kin Francisco B. Baloloy, Frederick D. Baloloy and Jennifer Baloloy.

“She (Baloloy) started out as a maid in the Binay household and worked her way up first as secretary in Binay’s law office and personal secretary in the Office of the Mayor. She (Baloloy) knows more secrets of Binay than his wife, Elenita,” said Mercado.